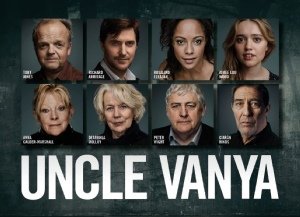 The production will run for sixteen weeks at the Harold Pinter Theatre from 14th January 2020 with Opening Night on Thursday 23rd January 2020. Tickets are on sale now.

In the heat of summer, Sonya (Aimee Lou Wood) and her Uncle Vanya (Toby Jones) while away their days on a crumbling estate deep in the countryside, visited occasionally only by the local doctor Astrov (Richard Armitage).

Olivier Award-winner Conor McPherson’s stunning new adaptation of Anton Chekhov’s masterpiece, Uncle Vanya, is a portrayal of life at the turn of the 20th century, full of tumultuous frustration, dark humour and hidden passions. Critically acclaimed director Ian Rickson returns to Chekhov for the first time since his landmark production of The Seagull in 2007, reuniting with BAFTA and Olivier Award-winner Toby Jones (The Birthday Party) alongside Richard Armitage, who returns to the UK stage six years after his Olivier Award-nominated performance in The Crucible. Uncle Vanya is the eleventh collaboration between Ian Rickson and Sonia Friedman Productions, with previous productions including Rosmersholm, Jerusalem, The River, Betrayal and The Children’s Hour.

Uncle Vanya is designed by Rae Smith, with lighting by Bruno Poet, music by Stephen Warbeck, sound by Ian Dickinson and casting by Amy Ball CDG.

Rosalind Eleazer will play the role of Yelena. Born in London, Rosalind graduated from LAMDA in 2015, winning the Spotlight Prize for Best Drama School Graduate. She went on to make her stage debut in Plaques & Tangle at the Royal Court Theatre.

Her television credits include the series Deep Water for Kudos, in which she co-stars with Anna Friel and Sinead Matthews, Breeders, two series of Harlots, Howards End, Rellik, NW, National Treasure and Lore.

She makes her feature film debut in The Personal History of David Copperfield, directed by Armando Iannucci, which has just opened the London Film Festival and is due for general release in January 2020.

Most recently Rosalind appeared at Wyndham’s Theatre in The Starry Messenger opposite Matthew Broderick and Elizabeth McGovern.

Dearbhla Molloy will perform the role of Grandmaman. Dearbhla was recently nominated for the Olivier Award for Best Supporting Actress in Jez Butterworth’s The Ferryman (Royal Court/Gieldud/Bernard B. Jacobs, Broadway).

Her other theatre credits include In Celebration, Arcadia, Hamlet, As You Like It, Much Ado About Nothing (West End), The Cripple of Inishmaan (Drama Desk Award and Irish Theatre Award for Best Supporting Actress), Hinterland, On the Ledge (National Theatre), The Hostage, Shadow of a Gunman, Lovegirl and the Innocent (RSC); Ditch (Old Vic Tunnels), The Seagull (Edinburgh Festival), Doubt (Tricycle), Juno and the Paycock for which she won the London Critics’ Award for Best Supporting Actress (Donmar/Roundabout), Macbeth (Bristol Old Vic), All My Sons (Liverpool), Trojan Women (Gate, London), And No More Shall We Part (Hampstead), Dancing at Lughnasa ( Tony Award nomination for Best Performance by a Featured Actress in a Play, Drama Desk Award, Theatre World Special Award), A Touch of the Poet, Outside Mullingar (Broadway), The Cripple of Inishmaan (Atlantic Theatre / US Tour), Much Ado About Nothing (Guthrie Minneapolis), Afterplay (Irish Rep, New York), Moment (Studio Theatre, Washington DC), Translations, Aristocrats, The Misanthrope, Ivanov, Living Quarters, Mrs Warren’s Profession, A Life (Irish Theatre Award for Best Supporting Actress) (Abbey Theatre), Phaedre, Uncle Vanya, The Philanthropist, Come on Over (Gate, Dublin); The Plough and the Stars (Gaiety).

Her film credits include Wild Mountain Thyme, 3096, No Reservations, The Damned United, Tara Road, The Blackwater Lightship, Home for Christmas, Bloom, Frankie Starlight, Run of the Country, Loaded and This is the Sea.

Her film credits include Last Christmas, Us Among the Stones, Love, Trespass Against Us, 13 Steps Down, Anna Karenina, Saints-Ex, Zulu Dawn, Wuthering Heights

The role of Professor Serebryakov will be performed by Ciarán Hinds. Ciarán began his career at the Glasgow Citizens Theatre and was a member of the company for many years. In Ireland he has worked at the Lyric Theatre Belfast, the Druid Theatre in Galway and at the Project. Ciarán is currently appearing at the National Theatre in Brian Friel’s Translations. Prior to this Ciaran played the role of Nick in Conor McPherson’s Girl from the North Country in the West End and the Old Vic. Extensive theatre credits include Lyndsey Turner’s Hamlet at the Barbican, Mark O’Rowe’s new play Our Few and Evil Days at the Abbey Theatre. Donmar Theatre and New York productions of Conor McPherson’s The Night Alive, on Broadway as Big Daddy in Cat on a Hot Tin Roof and at the Abbey Theatre in Dublin, in a co-production with the Royal National Theatre of Juno and The Paycock by Sean O’Casey, directed by Howard Davies. For the Gate Theatre he appeared in Conor McPherson’s The Birds, the Field Day Company’s version of Antigone, The School for Wives and Brian Friel’s The Yalta Game.

Ciarán’s television credits include MotherFatherSon, as John Franklin in The Terror, as Mance Rayder in Game of Thrones and as Bud Hammond in Political Animals, DCI Langton in Linda La Plante’s Above Suspicion and as Julius Caesar in the BBC/HBO co-production of Rome. This follows extensive television credits including leading roles in The Mayor Of Casterbridge, Jane Eyre, Seaforth, Ivanhoe, Sherlock Holmes, Prime Suspect 3 and the award-winning film of Jane Austen’s Persuasion, in which he played Captain Wentworth.

His extensive film credits include Peter Greenaway’s The Cook, The Thief, His Wife and Her Lover, December Bridge, Circle of Friends, Titanic Town, Some Mother’s Son, Oscar and Lucinda, The Lost Son, The Weight of Water and Mary Reilly, The Road To Perdition for Sam Mendes, The Sum of All Fears, Mickybo and Me, Calendar Girls, Lara Croft: The Cradle of Life, The Statement, Veronica Guerin and The Phantom of the Opera both for Joel Schumacher, Miami Vice for Michael Mann and Munich for Steven Spielberg. Amazing Grace for Michael Apted, Nativity for Catherine Hardwicke, Hallam Foe, A Tiger’s Tail, Excalibur for John Boorman, Margot at the Wedding for Noah Baumbach, There Will Be Blood for Paul Thomas Anderson, Stop Loss for Kimberly Pearce, In Bruges for Martin McDonagh, The Tale of Despereaux, Miss Pettigrew Lives for a Day, Cash, Race To Witch Mountain, Conor McPherson’s The Eclipse for which he won Best Actor at the Tribeca Film Festival, Life During Wartime, The Debt, Harry Potter and the Deathly Hallows, John Carter of Mars, Salvation Boulevard, The Rite, Tinker Tailor Soldier Spy, Ghost Rider: Spirit of Vengeance, The Woman in Black, Closed Circuit, The Disappearance of Eleanor Rigby, The Sea, Frozen, Last Days in the Desert, Agent 47 , Driftless area, Bleed for This, Silence for Martin Scorsese, Woman Walks Ahead, Red Sparrow, Justice League and most recently First Man.