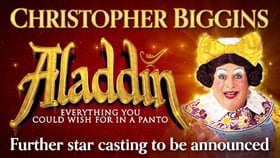 Well known for his incredible pantomime performances, Christopher Biggins brings his best-loved role, Widow Twankey, to life for the final time at Richmond Theatre this festive season. Biggins has enjoyed a hugely successful career in television, film and theatre. His countless TV appearances include being crowned ‘King of the Jungle’ on ITV’s I’m a Celebrity, Get Me Out of Here!, winner of Celebrity Come Dine with Me on Channel 4 as well as making regular appearances on Ant and Dec’s Saturday Night Takeaway. He appeared in the film adaptation of the stage play Run For Your Wife which was released in 2014 and has established himself as one of the country’s most popular pantomime performers having honed his on-stage skills in pantomime throughout his 40-year career.

The self-proclaimed ‘show business legend’ Count Arthur Strong (Steve Delaney) returns to the stage having made his pantomime debut for Qdos Entertainment in last year’s production of Cinderella at the London Palladium. Having launched the comedy character in 1997, Delaney turned his much-loved comedy creation from Edinburgh cult hit into a cornerstone of BBC comedy with over fifty episodes of Count Arthur Strong’s Radio Show! and three series of his eponymous TV sitcom. Count Arthur will take to the stage as the Count of Peking and the father of the beautiful Princess.

Issy Van Randwyck joins the cast as the magical genie Scheherazade. The music star, television actress and cabaret circuit favourite is best known for being part of the comedy singing group Fascinating Aïda with whom she has appeared internationally, as well as her television appearances in the popular sitcom Waiting for God and on stage in A Little Night Music at the National Theatre and A Streetcar Named Desire on Broadway.

Comedian Rikki Jay completes the star line up as Wishee Washee. With a television career launched from ITV’s The Big Big Talent Show, Rikki went on to appear on comedy programmes across UK television including The Big Stage, Jay Walking and Gagging For It and is a regular on Sky TV. Rikki has been a mainstay of pantomime for a number of years starring alongside the biggest names in UK theatre and television. Most recently seen on Live at the London Palladium, Rikki also regularly entertains global audiences on board the QE2 and world cruises, in cabaret venues across the United States, and has entertained British troops across the Middle East and the Falkland Islands.

Follow Aladdin, his hapless brother, and of course his mother Widow Twankey, on a spectacular adventure featuring a beautiful love story, flying carpets, a wish-granting genie, an evil sorcerer and a lamp packed full of spectacular family entertainment. Aladdin features all of the ingredients of the perfect pantomime; a fabulous cast and orchestra, laugh-out-loud comedy, stunning scenery and special effects, beautiful costumes and plenty of boos and hisses for all the family to enjoy.

This fantastic production marks the first year of a new pantomime partnership between Qdos Entertainment and ATG, aimed at building on the successful tradition of pantomime in ATG’s venues. Led by Nick Thomas and Michael Harrison, Qdos Entertainment is the world’s largest pantomime producer with over 600 productions to its credit. They are renowned for star-led comedy, spectacle, and innovative special effects and for producing high-quality festive productions which are both contemporary and true to the traditions of pantomime. They bring a host of star names and creative collaborators to its productions staged across Scotland, England, Wales and Northern Ireland each Christmas.