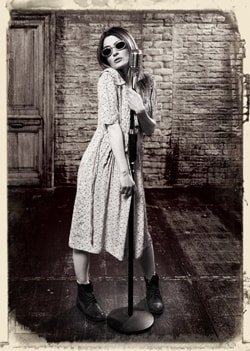 Casting is today announced for the West End transfer for Bob Dylan’s and Conor McPherson’s Girl From the North Country, following a sell-out, critically acclaimed run at The Old Vic.

Brought to life by an exceptional company of actors and musicians, award-winning playwright Conor McPherson beautifully weaves the iconic songbook of Bob Dylan into this new show full of hope, heartbreak and soul.
Duluth, Minnesota. 1934. A community living on a knife-edge huddle together in the local guesthouse.

The owner, Nick, owes more money than he can ever repay, his wife Elizabeth is losing her mind and their daughter Marianne is carrying a child no one will account for. And, when a preacher selling bibles and a boxer looking for a comeback show up in the middle of the night, things start to spiral beyond the point of no return…

Hannah Azuonye is part of the ensemble. This production marks her professional and West End debut. Her theatre credits include Thick Skin (Poor Michelle Theatre Company) which won the Samuel French New Play Award at the National Student Drama Festival. Her recent screen credits include The Things I Will Not Miss.

Claudia Jolly plays Katherine Draper. A recent graduate of the Guildhall School of Music and Drama (Gold Medial recipient). Claudia was recently seen in the BBC adaptation of NW and is soon to appear in the film On Chesil Beach. Claudia plays Mariarosa in the BBC Radio 4 adaptation of Ela Ferrante’s Neapolitan novels.

Karl Johnson plays Mr Perry. His recent theatre credits include King Lear (Old Vic), Hamlet (Barbican Centre), Fathers and Sons (Donmar Warehouse), Barking in Essex (Wyndham’s Theatre), Noises Off (Old Vic and West End), Frankenstein, The Seafarer, Tales From The Vienna Wood, Scenes From the Big Picture, The Walls (National Theatre). The Absence of Women (Lyric Theatre, Belfast), Almost Nothing/At the Table, Not Not Not Not Not Enough Oxygen, This is a Chair and The Night Heron (Royal Court). His television credits include King Lear, Mum, Born to Kill, Dickensian, Plebs, Atlantis, Call the Midwife, Merlin, The Trial of Tony Blair and Rules of Engagement. His film credits include Peterloo, Kaleidoscope, Mr Turner, The Deep Blue Sea and Close My Eyes.

Arinzé Kene plays Joe Scott. His theatre credits include One Night In Miami (Donmar Warehouse), Decade (Headlong), Been So Long (Young Vic Theatre), The Lion King (Lyceum Theatre), Daddy Cool (Shaftesbury Theatre) and Torn (Arcola Theatre). Arinzé’s television credits include Crazyhead, Our Girl, Youngers, EastEnders and Informer. His film credits include Been So Long, The Pass, Fantastic Beasts and Where to Find Them and Freestyle.

Tim McMullan plays Reverend Walker. His theatre credits include over 15 shows at the National Theatre including Common, Twelfth Night, Man and Superman, The Cherry Orchard, Burnt by the Sun, Coram Boy, Dark Materials and The Three Sisters; and he is an associate of Complicité with who his work includes The Master and Marguerita, Mnemonic and Three Lives of Lucie Cabrol. Other theatre credits include The Tempest (The Globe), Hapgood (Hampstead Theatre), Fathers and Sons (Donmar Warehouse), A Midsummer Night’s Dream (RSC), The Misanthrope with Keira Knightley (Comedy Theatre, West End), King Charles III (Wyndham’s Theatre), and As You Like It (Glove
Theatre). Film credits include King Charles III, The Woman in Black, The Queen, Shakespeare in Love, The Fifth Element and Shadowlands. Recent television credits include Melrose, Fearless, The Witness for the Prosecution, Dr Thorne, Grantchester II, The Go-Between, Foyle’s War (in which Tim played the MI5 agent, Valentine, for two series), The Hollow Crown: Henry IV: Parts 1 & 2, and Parade’s End.

Bob Dylan is one of our culture’s most influential and ground-breaking artists. Born in Duluth, Minnesota in 1941; self-taught on piano, guitar and harmonica, he travelled to New York City in 1961, quickly establishing himself as an explosive performer in the Greenwich Village music scene. More than half a century later, Dylan continues to perform almost 100 concerts each year. He has released more than 50 albums and written over 600 songs. He’s sold more than 125 million records and is the holder of 11 Grammy Awards. His songs have been covered more than 6000 times by artists as diverse as Duke Ellington, Jimi Hendrix, Guns N’ Roses, Stevie Wonder, Bob Marley and Adele. He is also an accomplished visual artist and author, and in 2016 was awarded the Nobel Prize
for Literature – the first songwriter to receive such a distinction.

Sony Music also announces the vinyl release of The Original London Cast Recording of Girl from the North Country. Released on the Silvertone label, and already available on CD, download and streaming services, the double vinyl will be available from 15th December. It is available to pre-order on Amazon now.
The Old Vic’s production of Girl from the North Country is produced by Tristan Baker & Charlie Parsons for Runaway Entertainment, Steven Lappin, Sony Music Entertainment UK and David Mirvish.

A packed line-up of 34 hit West End shows has been unveiled so far ahead of this year’s West End LIVE, a free and unticketed celebration of London’s … END_OF_DOCUMENT_TOKEN_TO_BE_REPLACED

Based on the true story behind the escape from the infamous Stalag Luft III prisoner of war camp, Tom, Dick and Harry (the names of the three tunnels … END_OF_DOCUMENT_TOKEN_TO_BE_REPLACED