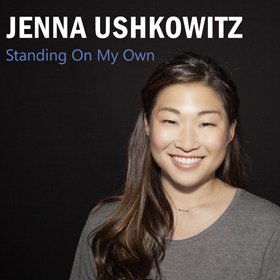 The Glee star has today released the song, Standing On My Own which is written by composers, Daniel and Laura Curtis. The release also opens the 2016 Your Voice Competition for entries.

Speaking about the Your Voice Competition, Daniel Curtis said; “The competition is an international search for the Musical Theatre talent of tomorrow. It is open to any nationality, age and group size and all the proceeds from the entry fees will be donated to The Kindred Foundation for Adoption, which was co-founded by Jenna. We’re so honoured to work with such an amazing artist who is so passionate about this fantastic cause.”

Laura Curtis explains more; “Entry packs are available at www.yourvoicecompetition.com. In the pack there are a number of our songs to choose from in different keys with sheet music and backing tracks. Simply choose which one you’d like to cover then follow the instructions on the website to send us your entry”.

The entries will be judged by a panel of Broadway and West End performers including; Simon Bowman, Hannah Elless, Jason Forbach, Adam Pascal, Nadim Naaman and Natalie Weiss. The winner will receive a workshop with Broadway legend Adam Pascal, theatre tickets, an overnight stay in New York, and a recording session.

The previous Your Voice Competition was fronted by Ramin Karimloo and raised funds for BBC Children in Need. The winner, Kasia Howley went on to perform at West End Live in Trafalgar Square and featured on Daniel and Laura Curtis’ last album, Love on 42nd Street.

Standing On My Own – Jenna Ushkowitz

The Your Voice Competition is sponsored by Première Classe Productions.
Standing On My Own is available now from iTunes, Amazon Mp3 and other online stores.

Following its multiple West End runs, and continuing success at its home – The Other Palace, Heathers the Musical will embark on its highly … END_OF_DOCUMENT_TOKEN_TO_BE_REPLACED

After creating the “absorbing and provocative” Version 2.0 and the “eminently lovable” Letters, Kashyap Raja returns to London with his new play Earth … END_OF_DOCUMENT_TOKEN_TO_BE_REPLACED