Following a sell-out run as part of The Turbine on the Jetty season, Hair The Musical (In Concert), directed by Arlene Phillips, will now play two performances at the London Palladium on Sunday 13th June, and two performances at Southampton Mayflower Theatre on 27th June 2021. The performances were originally planned for earlier this year, but were delayed due to Covid-19 restrictions. 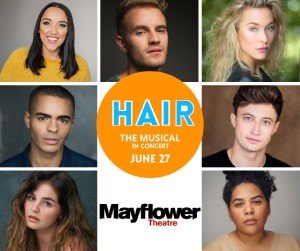 nHair The Musical (In Concert) has book and lyrics by Gerome Ragni and James Rado, music by Galt MacDermot, musical direction by Paul Schofield, design by David Shields, lighting and video design by Andrew Exeter and sound design by Dan Samson. Hair The Musical will once again be directed by Arlene Phillips.

Please note that all cast are subject to availability and may change before the performance dates.

The American tribal love rock musical Hair celebrates the sixties counterculture in all its barefoot, long-haired, bell-bottomed, beaded and fringed glory. In this specially produced concert version, get ready to groove to an infectiously energetic rock beat with songs like “Aquarius,” “Good Morning, Starshine,” “Hair,” “I Got Life,” and “Let The Sun Shine.” Exploring ideas of identity, community, global responsibility and peace, Hair remains relevant as ever as it examines what it means to be a young person in a changing world.

HAIR:
ARLENE PHILLIPS – DIRECTOR
Arlene Phillips is a showbiz legend honoured as a CBE for her services to dance; she has worked with stars from film and TV, to theatre and arenas, as well as becoming one of Britain’s favourite television judges.

The Theatre Cafe: The Turbine Theatre ticketing will be powered by The Theatre Cafe, West End’s stagiest destination and social platform.
Website: www.theturbinetheatre.com/whatson

Regent’s Park Open Air Theatre have today confirmed the casting for the title roles in Romeo and Juliet, which opens the 2021 season on Thursday 17 … END_OF_DOCUMENT_TOKEN_TO_BE_REPLACED

Andrew Lloyd Webber’s The Phantom of the Opera returns to its home, Her Majesty’s Theatre London, from 27th July. Experience the thrill of the West … END_OF_DOCUMENT_TOKEN_TO_BE_REPLACED