Hamilton which currently plays Tuesday – Saturday at 7.30pm with matinees on Thursday, Saturday and Sunday at 2.30pm at the Victoria Palace Theatre, will, from 12 July 2022, play Monday – Saturday 7.30pm, Thursday and Saturday at 2.30pm. Hamilton will extend to Saturday 17 December 2022. Hamilton is produced in London by Jeffrey Seller, Sander Jacobs, Jill Furman, The Public Theater and Cameron Mackintosh.

Hamilton is the story of America’s Founding Father Alexander Hamilton, an immigrant from the West Indies who became George Washington’s right-hand man during the Revolutionary War and helped shape the very foundations of the America we know today. The score blends hip-hop, jazz, blues, rap, R&B and Broadway – the story of America then, as told by America now

Hamilton has book, music and lyrics by Lin-Manuel Miranda, is directed by Thomas Kail, with choreography by Andy Blankenbuehler, musical supervision and orchestrations by Alex Lacamoire and is based on Ron Chernow’s biography of Alexander Hamilton. HAMILTON features scenic design by David Korins, costume design by Paul Tazewell, lighting design by Howell Binkley, sound design by Nevin Steinberg and hair and wig design by Charles G. LaPointe.

The Olivier, Tony and Grammy award-winning production opened at the newly re-built and restored Victoria Palace Theatre in London in December 2017. 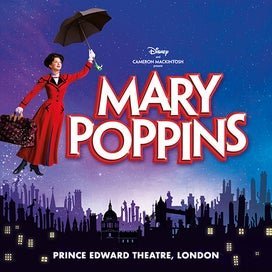 Mary Poppins which currently plays Thursday – Saturday at 7.30pm with a Family Night on Wednesday at 7pm and matinees on Thursday, Saturday and Sunday at 2.30pm at the Prince Edward Theatre, will, from 30 June 2022 also play Monday at 7.30pm. Mary Poppins extends booking to Sunday 18 December 2022 and is produced by Disney and Cameron Mackintosh. www.marypoppinsonstage.co.uk/

The magical story of the world’s favourite Nanny arriving on Cherry Tree Lane has been triumphantly and spectacularly brought to the stage with dazzling choreography, incredible effects, and unforgettable songs. The stage version of Mary Poppins, brilliantly adapted from the wonderful stories by PL Travers and the original beloved Walt Disney film, continues to be a smash hit around the world since its opening in London 17 years ago.

The original music and lyrics by Richard M. Sherman and Robert B. Sherman include the classic songs Jolly Holiday, Step in Time, Feed the Birds and Supercalifragilisticexpialidocious. New songs and additional music are by the Olivier award-winning British team of George Stiles and Anthony Drewe.

Book is by Academy Award®-winning screenwriter and Downton Abbey creator, Julian Fellowes and this production is co-created by Cameron Mackintosh. The producer for Disney Theatrical Productions is Thomas Schumacher. This production of Mary Poppins has orchestrations by William David Brohn with dance and vocal arrangements by George Stiles. Sound design is by Paul Gatehouse and lighting is by Hugh Vanstone and Natasha Katz. Co-choreography is by Stephen Mear. The reimagined set and costume designs are by Bob Crowley. Co-direction and choreography is by Matthew Bourne and direction by Richard Eyre.

Review by John Groves at LondonTheatre1.com
“…if you want a totally escapist evening at the theatre, with or without children in tow, you can do no better than Mary Poppins!”

Review by Chris Omaweng at LondonTheatre1.com
“The fusion between ‘old’ and ‘new’ is a snug fit, and this enthusiastic, impressive and breathtaking production must be seen to be believed.”

Following on from the return of the critically-acclaimed, five-star production of Cyrano de Bergerac, The Jamie Lloyd Company brings Chekhov’s tale of … END_OF_DOCUMENT_TOKEN_TO_BE_REPLACED

THE PHANTOM OF THE OPERA at Her Majesty’s Theatre is delighted to announce that booking is extended to Saturday 4 March 2023, with a new performance … END_OF_DOCUMENT_TOKEN_TO_BE_REPLACED

Producer Runaway Entertainment is delighted to announce that the critically acclaimed, smash hit, supernatural thriller 2:22 - A Ghost Story will … END_OF_DOCUMENT_TOKEN_TO_BE_REPLACED