Following a sold-out UK national tour Here Come The Boys, featuring four superstar ‘Kings of Dance’, is set to transfer to the London Palladium for a 10-day celebration in a brand new dazzling new production! 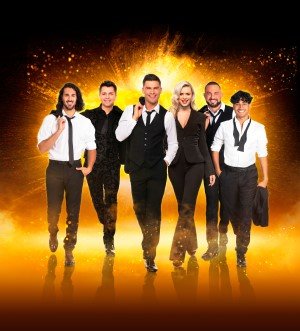 Featuring a cutting-edge soundtrack of dance-floor anthems, club classics and guilty pleasures, ‘Here Comes the Boys’ is ready to kick off the return of live theatre in London’s West End.

Join Aljaž, Pasha, Graziano, Robin, Karim and Nadiya, alongside a spectacular ensemble of international dancers, in this show-stopping dance extravaganza, which promises to be the biggest party in town!

In a club setting, a live resident DJ will spin a cutting-edge soundtrack of dance-floor anthems, club classics and guilty pleasures as Aljaž, Graziano, Pasha and Robin go head-to-head in a battle of Latin, Ballroom, Commercial and Contemporary dance disciplines – with the audience judging the contest.

Capacity at the London Palladium has been reduced to comply with COVID-19 Secure guidelines for social distancing plus robust risk mitigation. In addition to hand sanitation, face coverings and track and trace, other measures will include contactless tickets, temperature testing and the deep clean and sanitation of the theatre.

The stars’ dance credentials are impeccable:

Aljaž Škorjanec is one of the UK’s most popular male professional dancers. A 19-time Slovenian champion in Ballroom, Latin and Ten Dance, Aljaž became an instant hit on his UK TV debut in 2013 when he partnered model and TV presenter Abbey Clancy to lift the coveted Glitterball Trophy. Having appeared in every series since, Aljaž and his partner, actress Gemma Atkinson, were runners-up in the 2017 final.

Aljaz said: “I am delighted to welcome such an amazing cast to join me in ‘Here Come the Boys’. I had such a great time on tour last year, so to bring this show into the West End is a dream come true. I can’t wait to battle it out with these boys and let the audience decide as there can only be one King of the Dance! Seriously though, it’s going to be bigger and better than before and I can’t wait! 2020 has been a really tough year for everyone, and this is going to be the perfect antidote and start to 2021.”

Pasha Kovalev competed on the BBC show for for eight years. He was crowned champion when partnered with Caroline Flack in 2014. He was runner up with Ashley Roberts in 2018.

Pasha said: “I was so upset when the 2020 ‘Here Come the Boys’ tour was postponed due to the pandemic so to hear that we’re taking it into the West End is truly amazing! This show, with the incredible cast of other dancers, is going to blow the audience away. It’s a dance marathon and only one of us will end up as King of the Dance… and of course, that’s going to be me!”

Graziano Di Prima made his debut in 2018, partnered with Vick Hope.

He said: “I was home in Sciliy in the middle of the pandemic so I was in need of some good news….then my agent called and I couldn’t believe that I was being asked to star in ‘Here Come the Boy’s and to top it off play the West End! I’d heard how incredible the show was back in 2019 so am super excited to be involved in this brand new production. We’ll be opening in London’s West End with great friends and my lovely fiance Giada Lini…what could be better!”

He said: “I’d heard how good ‘Here Come the Boys’ was on tour so when Aljaz asked me to join the cast I didn’t have to think twice. I have so missed dancing and am really looking forward to working with him and Pasha again and getting to know Graziano and I loved what Karim did in the 2019 series. I am going head to head with four great dancers to see who might be crowned King of the Dance and I can’t wait! Its full-on dance!”

Karim Zeroual, a CBBC presenter since 2014, was the celebrity runner up in 2019, partnered with Welsh professional dancer Amy Dowden.

He said: “To be asked to join the cast of ‘Here Come the Boys’ was so unexpected. To be honest I was a bit nervous at first but with some encouragement from Aljaz I knew I had to do it. I’ll be hosting the show, spinning some records and showing off a few of my tricks. I have a few surprises up my sleeve that the audience won’t be expecting! This show has it all… great dance routines, a world champion beatboxer, fantastic music and some audience participation. If you want a good time after a difficult year this is the perfect ticket!”

Nadiya Bychkova is a highly-decorated dancer originally from Ukraine. She is a two-time World Champion and European Champion in Ballroom and Latin ‘10’ Dance. Nadiya joined ‘Strictly Come Dancing’ in 2017 and in her first year made it to the quarter-final with her celebrity partner, ‘EastEnders’ actor, Davood Ghadami. She has since also partnered Blue’s Lee Ryan and footballer David James.

She said: “The boys better watch out because here comes the girl! I am delighted to be dancing again with my friends at the incredible London Palladium! I can’t wait to perform to a live audience again…it is going to be a party to remember!“

New dates are announced today for the return of Agatha Christie’s Witness for the Prosecution at London County Hall on the Southbank. As the … END_OF_DOCUMENT_TOKEN_TO_BE_REPLACED

5North and Ellie Keel Productions’ Written on the Waves, a series of world premiere audio plays – the penultimate play, and first for a family … END_OF_DOCUMENT_TOKEN_TO_BE_REPLACED

Sonia Friedman Productions announces the dates for the RE:EMERGE season as priority booking opens on 15 April at 10.30am, with public booking opening … END_OF_DOCUMENT_TOKEN_TO_BE_REPLACED

Disney Theatrical Productions today announces that Frozen is back on sale to the public, opening at the newly refurbished Theatre Royal Drury Lane on … END_OF_DOCUMENT_TOKEN_TO_BE_REPLACED