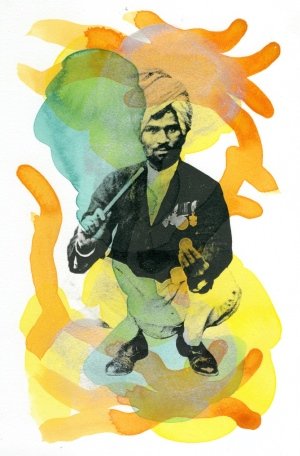 Exposing the little-known history of the Indian migrant labourers indentured to work on plantations around the world following the Abolition of Slavery, the award-winning Border Crossings brings The Great Experiment to audiences across London.

This new work recounts the moment in history when more than two million Indians were indentured to replace slave labour in Mauritius, Malaysia, the Caribbean and mainland Africa as part of The Great Experiment. Carefully devised by performers from various backgrounds in a process led by those of Mauritian heritage, The Great Experiment, directed by Michael Walling, tells two parallel stories – that of the labourers and that of the actors themselves grappling with their own relationships to this difficult history and its enduring effects that are still felt today.

As the conversation surrounding migration becomes increasingly vehement and divisive, The Great Experiment galvanises an urgent intercultural dialogue that both illuminates our hidden history and interrogates who has the right and the responsibility to retell it. Having worked with expert historians and the communities descended from the indentured workers, the production also makes use of multimedia and archive footage that the audience are encouraged to explore and interact with before each performance. Generously supported by Arts Council England, Heritage Fund, London Community Foundation and Cockayne Foundation, it will be staged in both theatres and museums across London alongside an exciting programme of workshops, talks and museum collection days.

Director Michael Walling comments, Most of Border Crossings’ previous work has been very contemporary – but the current moment seems to call for a new look at our histories, and particularly the untold histories of the British Empire. The story of the Indentured migrations feels incredibly resonant at a time when people are travelling the world in search of a better life – not just because these Indian labourers also migrated for work, but also because their work laid the foundations for the very inequalities which make Europe and America so rich, and the global South so poor today. Our confrontation with this history has brought into the open some incredibly powerful questions about who we are in the UK today: how our multicultural space came into being and why it contains so many unresolved divisions. The past is not past.

Deviser-Performer Nisha Dassyne adds, Working on The Great Experiment, I’ve had to visit the ghosts and memories in my family. They have become more concrete, more human, more accessible. The connection to my ancestors isn’t just something to talk about anymore – it’s a real connection.

THE PRINCE OF EGYPT, the hit musical based on the classic DreamWorks Animation film, is proud to confirm the complete cast, orchestra and company of … END_OF_DOCUMENT_TOKEN_TO_BE_REPLACED

Tom loves a laugh! But it’s no joke when he can’t even remember where he’s parked the car... Fortunately, his loving wife Trish comes to the … END_OF_DOCUMENT_TOKEN_TO_BE_REPLACED

Following a sell-out tour in 2018/2019, the producers of the smash-hit ROCK OF AGES are delighted to announce the cast and Kevin Clifton’s return in … END_OF_DOCUMENT_TOKEN_TO_BE_REPLACED

The classic tale of The Three Musketeers is brought to you by the inconceivable, unimaginable and fantastical FoolHardy Theatre… a company with … END_OF_DOCUMENT_TOKEN_TO_BE_REPLACED