This new production of Home, I’m Darling opens at the Theatre Royal Windsor on 25 January 2023, prior to the play’s first extensive national tour. Leading the cast are BAFTA award winner Jessica Ransom (Doc Martin, Armstrong and Miller, Horrible Histories) as Judy, Diane Keen (Doctors, The Cuckoo Waltz) as Sylvia and Neil McDermott (Eastenders, The Royal) as Johnny, with further casting to be announced. 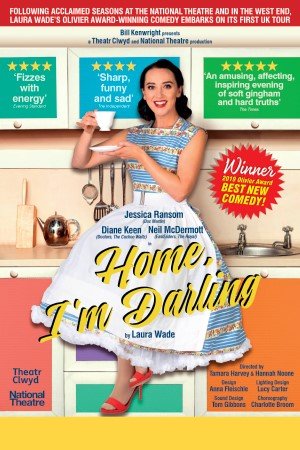 This sparkling, thought-provoking comedy by Laura Wade (Posh/The Riot Club) is about one woman’s quest to be the perfect 1950’s housewife.

Every couple needs a little fantasy to keep their marriage sparkling. But behind the gingham curtains, things start to unravel, and being a domestic goddess is not as easy as it seems…

Home, I’m Darling received its World Premiere at Theatr Clwyd in 2018, before playing at the National Theatre and then transferring to the Duke of York’s Theatre in the West End, winning the 2019 Olivier Award for Best New Comedy. This production reunites the entire original creative team, led by Theatr Clwyd Artistic Director and Co-Director Designate of the Royal Shakespeare Company, Tamara Harvey. It is co-directed by Hannah Noone, with design by Olivier award-winner Anna Fleischle, lighting by Lucy Carter, sound design by Tom Gibbons and choreography by Charlotte Broom.

Further tour dates to be announced.

'Look anyone will tell you, I’m a pretty straight sort of guy.' Tony Blair A reckless reappraisal of the life of former Ugly Rumours front man and … END_OF_DOCUMENT_TOKEN_TO_BE_REPLACED

Michael Harrison and the Really Useful Group are thrilled to announce that The Wizard of Oz, the musical based on the iconic story by L. Frank Baum, … END_OF_DOCUMENT_TOKEN_TO_BE_REPLACED

Following major demand for tickets, the Queen of comedy Dawn French has announced a host of new UK tour dates for her critically acclaimed live … END_OF_DOCUMENT_TOKEN_TO_BE_REPLACED