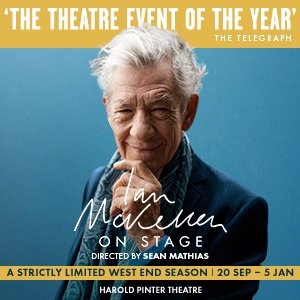 Ian McKellen On Stage With Tolkien, Shakespeare, Others and YOU!

Sir Ian McKellen has joined with Ambassador Theatre Group to present his biggest adventure to date. To celebrate his 80th Birthday, Ian has been touring the UK playing 80 of his favourite theatres, all to raise money for British Theatre. Now, Ian completes his epic journey by returning to the West End for a strictly limited run of the show that has been loved by audiences young and old, all around the country.

From Gandalf to Lear, Widow Twankey to Richard III, join Ian as he revisits an incredible career of over 50 years of stage and screen, with a nod to his most iconic and beloved roles in this intimate performance. Watch as he brings these well-known characters to life performing short scenes, and listen to never-before-heard anecdotes of a life in show business.

Don’t miss a once in a lifetime opportunity to see the greatest actor of his generation, coming to the Harold Pinter Theatre.

Regent’s Park Open Air Theatre have today confirmed the casting for the title roles in Romeo and Juliet, which opens the 2021 season on Thursday 17 … END_OF_DOCUMENT_TOKEN_TO_BE_REPLACED

Andrew Lloyd Webber’s The Phantom of the Opera returns to its home, Her Majesty’s Theatre London, from 27th July. Experience the thrill of the West … END_OF_DOCUMENT_TOKEN_TO_BE_REPLACED