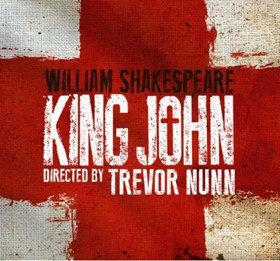 Trevor Nunn returns to the Rose to direct Jamie Ballard as King John, Howard Charles as Philip the Bastard, Lisa Dillon as Constance and Maggie Steed as Queen Eleanor.

Richard the Lionheart is dead. His youngest brother John has become King of England despite claims from the French that the throne should go to his nephew, Prince Arthur. As war is declared between England and France an inheritance dispute is brought before the King by Richard’s illegitimate son, Philip the Bastard.

With scheming, ruthless politics and some of Shakespeare’s most striking characters – this is a classic that feels contemporary in its strong parallels to modern day Britain.  A unique opportunity to see this rarely performed history play brought to life on the stage.

Q&A with Maggie Steed:
You are in the cast of King John at The Rose Theatre playing the role of Queen Eleanor. Which aspects of her character have you looked to focus on in your portrayal?
Eleanor of Aquitaine was a very strong, extraordinary woman of her times. Powerful, educated and rich. Also a very political animal. She was very cultured and witty. I have tried to look for moments in the play that might bring that across and fortunately Shakespeare has written her like this.

How does Queen Eleanor fit into the storyline?
Queen Eleanor is the mother of John and had ruled England whilst her first son Richard was away at the Crusades. In this play she is a strong influence on John and stands behind him to educate and support him. When she dies he sort of falls apart.

How much of a challenge is it to wear royal clothes during a production?
None, except you have to remember not to fall over your train! I think the crown does give me spots on my forehead!

What can you tell us about the story of King John?
King John was a weak, though clever, man not suited to be king. He succeeded to the crown and fought many battles to hold onto it – mostly against France who supported his nephew Arthur who also claimed the throne. The play deals with these times and the corrupt power of the church.

What makes this a must-see production?
It is full of good actors, the language is fantastic – and it is mainly interesting because Shakespeare shows the political waywardness of the times and such waywardness is still relevant today.

The production marks Shakespeare’s 400th anniversary and is the penultimate play in Nunn’s undertaking to direct all 37 of Shakespeare’s plays. King John opened on 18th May at the Rose Theatre Kingston, playing until 5th June 2016.

'Look anyone will tell you, I’m a pretty straight sort of guy.' Tony Blair A reckless reappraisal of the life of former Ugly Rumours front man and … END_OF_DOCUMENT_TOKEN_TO_BE_REPLACED

Michael Harrison and the Really Useful Group are thrilled to announce that The Wizard of Oz, the musical based on the iconic story by L. Frank Baum, … END_OF_DOCUMENT_TOKEN_TO_BE_REPLACED

Following major demand for tickets, the Queen of comedy Dawn French has announced a host of new UK tour dates for her critically acclaimed live … END_OF_DOCUMENT_TOKEN_TO_BE_REPLACED