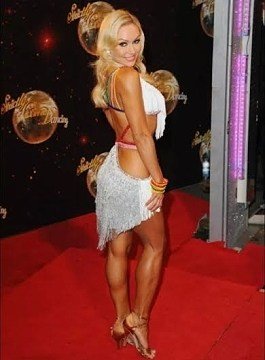 Kristina Rihanoff took time out from her busy schedule this week to chat about the forthcoming BBC’s Strictly Series and The Dot Com Children’s Foundation.

Strictly Come Dancing Series 12 is here and your partner is Simon Webbe! How excited are you about having Simon as your partner?
I am really excited. We haven’t started training yet, as Simon is busy filming this week with Blue for their album, and he has a lot of things going on. So we will start next week.

We will be working weekends and evenings to catch up on lost hours. I am excited about the partnership and I know Simon is keen and eager to do really well.

We will only have 5 days to rehearse and practice, while everyone else will have 10 days. So it is very nerve-wracking but we will try to do well.

What are you doing this week as you are not able to rehearse?
Next week is my first Charity Ball for the Dot Com Children’s Foundation. http://www.dotcomcf.org

It has taken a lot of time to put it all together, and I am so very excited about it. There are still some final details to put together for next week so that is keeping me busy. There is a lot of pressure and I seem to be constantly on the telephone organising things, but I am really looking forward to it all coming together.

Last year you were in the West End with Robin Windsor in Burn The Floor at the Shaftesbury Theatre – what have you been doing since then?
I have travelled a lot doing shows with BBC Wordwide promoting Strictly and at times I am reminded of working on Burn The Floor.

The experience of being on the West End with Robin will always be with me. It had a different feeling performing in front of a live audience each night, and each night was different. Both Robin and I really enjoyed it and the experience stays with you.

One of your favourite dances with Robin Windsor in Burn The Floor, was the Rumba, do you have a particular favourite dance?
I don’t really have a favourite dance as such. I do really like the waltz and ballroom, and the rumba and Latin, but it does depend on the mood.
Robin and I really liked the Latin dances together as we are both high-energy people.

Can you tell us about this year’s Strictly Come Dancing?
There are a lot of people who can do really well this year, and there are so many that show great determination.

You will see lots of unusual group dance numbers, which is very exciting. It will bring many types of dancing styles together.

Have you any message for fans of Strictly Come Dancing?
Thank you for supporting the show. The success of the show is due to the people that love watching it, and many of them becoming loyal fans. The show continues to grow in popularity due to the massive support that it has. It makes us all feel incredible when you see the viewing figures, especially with 9.4 million watching the launch programme of the show. It is an amazing number of people.

I think this year will be very exciting as we have some fabulous personalities and an incredible cast!

Kristina Rihanoff is a Trustee of the charity, The Dot Com Children’s Foundation, which aims to stop abuse and violence against children.

The Dot Com Foundation teaches vulnerable schoolchildren about right and wrong behaviour, and how to ask for help if they are victims of physical or sexual abuse using the ‘Values Versus’ Violence education journals, and a cartoon character called Dot Com. Croydon Council has introduced the programme across all 80 of the Borough’s Primary Schools to help combat record reports of domestic violence amongst families.

The charity was launched by Kristina with volunteer civil servants at the Home Office. The star, who used ballroom dancing as a form of escapism growing up, became involved in the charity – set up by former newsreader and child sexual abuse survivor Sharon Doughty – after her experience growing up in Soviet Russia.

Kristina says that she hopes her story will help inspire other young people. She said: “Dance lessons were where I felt safe. I want children growing up now to know that if there are problems at home, there is something that can be done and to encourage them to talk about it.”
http://www.dotcomcf.org/