Home » London Theatre News » Interview with cast from Let It Be 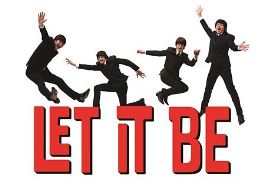 LET IT BE is currently celebrating the 50th Anniversary of the world’s most successful rock’n’roll band, The Beatles. LET IT BE is a spectacular theatrical concert with forty of The Beatles’ greatest hits. The show is currently on at the Savoy Theatre, booking until 8th February 2014 , before going on a UK Tour.

Recently before a show, four of the cast took time out to answer some questions about themselves and LET IT BE, and this is what they had to say.
Cast: Emanuele Angeletti (Paul), Reuven Gershon (John), Stephen Hill (George) and Luke Roberts (Ringo).

You are all primarily musicians, not trained actors?
Luke: Not us, there are a couple of guys in the cast that have more of an actor’s background. But it’s very much a musician’s gig.
Emanuele: It’s not really a musical, it’s concert theatre.

Emanuele, you were doing Beatles’ performances before this, how did it start for you?
Emanuele: It was my job since I was a kid. Well, not a job, more a hobby. I remember playing Paul in front of a mirror, so for me this is a dream come true.

Do you always play with the same set of people, or does the line-up change?
Luke: The general rule is that there are two bands that will frequently be the same musicians. But it’s such a demanding show that quite frequently it mixes it up and we have a whole company of musicians so frequently we will be playing with other musicians. The general idea is to have the two main bands that perform together, so more often than not we will be with the same guys.
Reuven: There are two bands, and one set of understudies. But they do quite a lot as well. So when people are on holiday or ill, they cover.

In the show you’re very much in character. Is this something you consciously do, think about where Beatles were as a band in each period? Towards the end there’s a lot of conflict in the band, do you find that plays into how you are with each?
Reuven: We definitely try to play like the characters as they grew through the Beatles period. Like the early days they’re fun and happy, ambitious, enjoying themselves. Then they get a bit tired, then go into Sgt Pepper and they’re a bit high, a bit of drugs going on, at Magical Mystery Tour I think more drugs (!), but also lots of love and peace kind of feeling, with the Vietnam war going on and them singing All You Need Is Love, it’s very important.
Emanuele: I think it’s from Abbey Road you get that feeling.
Reuven: And then the conflict is from that period. We don’t have conflict live falling out on stage or anything, because no one wants to see that. But it’s subtle, we’re not the happy guys we were, everyone is a bit more serious. As John Lennon I’m thinking about Yoko perhaps, and losing interest in being a Beatle. So I’m in that mind-set.
Luke: For me, it’s a good show from that point of view in that it’s very clearly distinct between different sections. And it’s very easy when the curtain comes down and we do a quick change, for the curtain to come up and you can be this different character. And I think it’s good, certainly within the first song of a new era, to really try and get that, because the audience really do pick up on that. Oh hang on, wow that’s totally changed. And I think the show does really well from that point of view. All the visuals and effects aid that a lot.

How many wigs do you wear in a show?
Stephen: Lennon, you’ve got the most.
Reuven: I use two. No, sorry, three.
Luke: I can beat that. I’ve got four now.
Reuven: We’ve all grown our own hair as well.

You are going on tour next year. Will it be the same production?
Reuven: Yes, it’s the same production.
Luke: The audience will see the same show as here.
Emanuele: Sometimes we change some songs.
Reuven: A lot of the places we’ll be playing, the Beatles have played.

What is it like backstage?
Luke: Sexy, I would say.
Reuven: Yeah, just say it’s sexy! Very sexy.

Is there a click-track on A Day In The Life?
Reuven: …how would you know that?
Brief technical discussion later…
Luke: It’s there so it’s exactly like the record, because one verse is faster than the other. And we have done this whole show without click. The reason they’ve said they want that one on click is to make it exactly like the record, and it’s also for the lighting. Because it’s so crazy, and the visuals are so integral to that, it’s a lot easier to marry up with that visually if the guys running the lighting hear the click as well.

With regard to Eleanor Rigby, do you have a music cue to know where to come in on that one?
Reuven: Yes, and a count in as well.
Emanuele: It’s played just by Reuven and Michael Bramwell. Everything is played live by us and Michael. He plays all the instruments not played by The Beatles.
Luke: There’s nothing on track.
Reuven: The swell of the orchestra on A Day In The Life is the only thing that’s pre-recorded. All the strings, like on Eleanor Rigby, is played live. Michael and I are playing them.

Emanuele, you recorded at Abbey Road. What was that like?
Emanuele: It was in 2005 with my Italian band. We won a competition. The studio was Studio 2, where the Beatles recorded. It’s exactly the same, the same floor. Even the clocks on the wall are the same.

Stephen, you toured with Jerry and The Pacemakers?
Stephen: Yes, with Gerry and The Pacemakers and The Searchers. We were a Beatles tribute act. The tour was called Back To The Cavern, it was all Brian Epstein managed groups. It was great! This Let It Be tour is going places The Beatles were playing, and I went there with that tour, so for me it’s going back to a lot of the same theatres and reminiscing. Gerry Marsden was there with the Beatles and Epstein. It was a pleasure to do those gigs and hear some of the stories.

We heard already how Emanuele started out as a Beatle. How did the rest of you start out being someone from the Beatles?
Reuven: John Lennon was my favourite pop star when I was a boy. I used to imitate him. And I loved The Beatles. They were my favourite band. So I was always a Beatles fan. I didn’t have any ambition to be John Lennon. The audition came along and I thought ‘Wow, that’s perfect! That’s exactly what I want to do.’ And I got lucky, I got the job.
Stephen: Same for me as a lead guitarist, George Harrison. It’s my favourite thing in the world. A job like this is great.
Luke: I’d never done anything specifically as Ringo before. The closest thing I’d done was playing in a Paul McCartney tribute act called ‘All McCartney’. It was nice, because it got me involved with all the songs which I could do live later. And this was the first “The Beatles” thing. So I had my homework cut out somewhat. But I love it!

Have you ever met any of the Beatles?
Reuven: I’ve met Paul McCartney. It was great! It was at a party, his party. I was in this show called The Buddy Holly Story and I was playing Buddy Holly, and because Paul McCartney loves Buddy Holly he threw a party to celebrate Buddy Holly’s birthday. And some of us from the show were invited. So I went along, and I met him, went up to him and shook his hand, and he took my hand and went “Rock ‘n roll! Rock ‘n roll!” It was pretty cool. At the end of the night I serenaded him and Heather.

Luke, you’ve done quite a few musicals.
Luke: Yes, they’ve mostly been short runs, but it’s been good to get my head into reading charts and things like that. That’s been really interesting. This is the first non-pit show I’ve done. I do enjoy having that extra stage element to it.

The ‘extra stage element’, do you mean the adoring screaming fans?
Stephen: Adoring, screaming ‘fan’.
Luke: We do get some regular fans and it’s great, it’s nice to see them. There’s one in particular that’s guaranteed she’d be up, she’ll be dancing. She’s frequently on the front row. And when the first person gets up on the front row there’s a domino effect on the rest of the audience, they will get up and it’s really nice to see. And that’s the thing, why it’s nice being on stage, because you see that. You don’t really see that when you’re in the pit.

Stephen, you have a young child. Do you find it hard to be touring?
Stephen: It’s the hardest thing in the world. Kids change your whole life completely. Being a musician, touring, I’d go away for six months. But with children, you want to go back every night and see your family. You want to be there for them. It’s hard, hard work. I missed the birth of my child for this job! I was in Canada. But it’s the first Let It Be baby, so she’s part of the family. Your life changes, and it’s not about you, it’s about your family. That’s why I work, to live. I love my job, it’s the best job in the world. But I work for my family.
Luke: If you go into his dressing room, it’s full of pictures.
Stephen: But before I had children, I didn’t give a shit about anything. I’d go anywhere, but now I wouldn’t want to go to Japan for months.

Why should everyone come along to see Let It Be?
Reuven:To see the illusion of The Beatles play their greatest hits in a timelined concert, and recreate some of their classic moments as a live band.


Many thanks for taking time out to chat, and very best wishes for Let It Be at the Savoy Theatre and the forthcoming tour.

ENGLISH TOURING OPERA, the only English professional touring opera company, working on a minuscule Arts Council subsidy when compared to other, less … END_OF_DOCUMENT_TOKEN_TO_BE_REPLACED

TuckShop - the UK’s only specialist production company devoted all things drag - are back in the West End this Christmas with DICK WHITTINGTON, the … END_OF_DOCUMENT_TOKEN_TO_BE_REPLACED

Producer Stacey Mindich has announced the Olivier award-winning Company returning to Dear Evan Hansen next month. The London production reopens at the … END_OF_DOCUMENT_TOKEN_TO_BE_REPLACED

Global Creatures, the producer of Moulin Rouge! The Musical, is thrilled to announce today the cast for the UK premiere of the acclaimed show, which … END_OF_DOCUMENT_TOKEN_TO_BE_REPLACED