Cirque du Soleil‘s Quidam will be in London from 4th January to 9th February 2014 at The Royal Albert Hall.

About The Show: “Quidam: a nameless passer-by, a solitary figure lingering on a street corner, a person rushing past and swallowed by the crowd. It could be anyone, anybody. Someone coming or going at the heart of our anonymous society. A member of the crowd, one of the silent majority. The one who cries out, sings and dreams within us all. This is the “quidam” whom this show allows to speak. This is the place that beckons – a place for dreaming and genuine relations where all quidams, by proclaiming their individuality, can finally emerge from anonymity.” 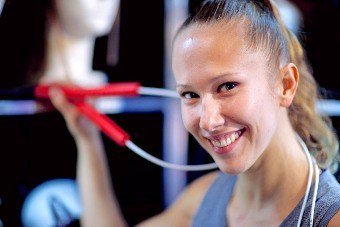 Kata Banhegyi is an amazing skipping soloist in the show and has been in the company for a number of years. She is also a multiple world and European skipping champion, having won the World Championships 3 times and the European Championships 5 times for her amazing talent.

Kata recently took time out to answer some questions about herself and the show:

You were part of the National Skipping Team of Hungary, where you won the World Championships 3 times and the European Championships 5 times. How much of your expertise is ‘nature’ rather than training?
KATA:  Well, I have been doing skipping since I was 6 years old. It was instilled in me, becoming a part of me and thus becoming a part of my life.  It was a lot of hard work invested while I was competing, then when Cirque du Soleil offered me the contract for Quidam I knew that I would have to continue working as hard as I did before to be part of such an amazing cast. Of course to have the talent as well it’s a very nice combination but I believe that with training you can get very far.

You are part of Cirque du Soleil touring Europe. What can you tell us about being a part of this travelling company?
KATA: I love travelling. So, for me it’s just great to be able to do what I like as my job and having the opportunity to get to know different places and people from all over the world and of course it’s interesting as well to feel how people receive our show in different countries. For me as a performer it’s always a great feeling to be on stage and feel the people appreciate what you are doing.

What do you enjoy most about being with the show?
KATA: I like to be on stage so that ‘s the first thing I would give as an answer, and it’s also very nice that we have so many artists from different places, doing different things that we can always learn from each other! It’s just a great group of people to work with!

What can you tell us about your role in the show and Quidam, which is coming to London in January 2014?
KATA: I do the Skipping Act on Quidam , which is a group performance  and I’m one of the soloist in the number, it’s a very lively and fun act, the audience likes it a lot, it’s takes them back to their childhood when they were kids and just played around at the schoolyard for example, of course the level of skipping is quite high compared to normal skipping!

Why should everyone come along to see the show at The Royal Albert Hall?
KATA: It’s a great show with lot of high quality aerial acts and floor acrobatics, we also have a live band and the music is beautiful so it’s a complete program for family, it’s great for kids and couples who are looking for a nice night out!

Tickets are available at www.cirquedusoleil.com/quidam
or by calling 0845 401 5045