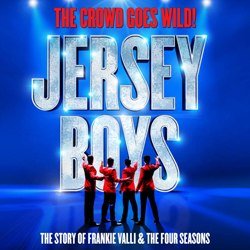 Jersey Boys will celebrate its 6th Birthday in London on 18th March. Jersey Boys has now been seen by over 19 million people worldwide and is established as one of the West End’s long-runing and most popular shows. Jersey Boys will also be touring the United Kingdom for the first time from September 2014.

Jersey Boys follows the rags-to-riches tale of Frankie Valli and the Four Seasons as they work their way from the streets of Newark to the heights of stardom, and features such hits as ‘Sherry,’ ‘Big Girls Don’t Cry,’ ‘Can’t Take My Eyes Off of You,’ ‘Oh, What a Night’ and many more.

Directed by Des McAnuff, with a book by Marshall Brickman and Rick Elice and music and lyrics by Bob Crewe and The Four Seasons’ own Bob Gaudio, it has won four Tony Awards, including Best Musical, Best Actor in a Musical, Best Featured Actor in a Musical and Best Lighting Design of a Musical. McAnuff is on board for the London version of the show, as are the Broadway creative team: choreographer Sergio Trujillo, production designer Klara Zieglerova, lighting designer Binkley and costume designer Jess Goldstein.

Adapted from Susan Hill’s classic book, The Woman in Black at the Fortune Theatre has been thrilling London audiences since 1989. In The Woman … END_OF_DOCUMENT_TOKEN_TO_BE_REPLACED

The producers of the multi-award-winning, critically acclaimed production of CABARET at the KIT KAT CLUB in London’s West End are thrilled to announce … END_OF_DOCUMENT_TOKEN_TO_BE_REPLACED

With well over three thousand productions at the Edinburgh Festival Fringe 2022, here’s my attempt at a list of recommendations. I Wish My Life … END_OF_DOCUMENT_TOKEN_TO_BE_REPLACED