Sonia Friedman Productions and the Royal Court Theatre have confirmed the return of Ian Rickson’s production of Jez Butterworth’s Jerusalem to London’s West End for a strictly limited 16-week engagement. Mark Rylance and Mackenzie Crook will reprise their celebrated roles as Johnny “Rooster” Byron and Ginger respectively, with further casting to be announced at a later date. 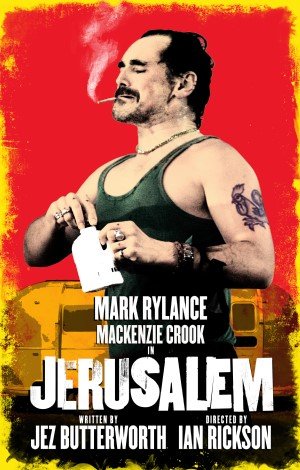 Previewing at the Apollo Theatre from 16 April 2022 with the opening night on 28 April 2022, Jerusalem will run until 6 August 2022. There will be over 800 seats at £15 or under each week across the house throughout the run with additional education rates of £25 per student ticket. Sign-up is open today (29 July 2021) for priority booking at www.jerusalemtheplay.co.uk from 10am with exclusive priority booking for those who have signed up by 10am Monday 9 August 2021. Tickets will go on general sale Monday 16 August 2021 at 10am.

Jez Butterworth’s award-winning play, which premiered at the Royal Court in 2009, returns to the West End following record-breaking sold-out runs at the Royal Court and the Apollo Theatres in 2009, 2010 and 2011 as well the Music Box Theater on Broadway in 2011.

On St George’s Day, the morning of the local county fair, Johnny Byron is a wanted man. The Council officials want to serve him an eviction notice, his son wants his dad to take him to the fair, Troy Whitworth wants to wreak his revenge and a motley crew of mates wants his ample supply of drugs and alcohol.

Mark Rylance’s career has so far earned him an Academy Award®, three Tony Awards®, two Olivier Awards, three BAFTAs and one SAG Award. Rylance was the artistic director of Shakespeare’s Globe Theatre in London for 10 years (1996-2006). In 2018, he returned to The Globe to play Iago in Othello, directed by Claire van Kampen and previously in 2015, to play King Philippe V in Farinelli and the King, written by van Kampen, which then moved to the West End, garnering six Olivier Award nominations, before the play moved to Broadway. Recently announced was the debut run of a radical new play, Dr Semmelweis co-written by Rylance and Stephen Brown, with Rylance playing the lead role at the Bristol Old Vic in January 2022. Additional theatre roles include Ron in Nice Fish, which he also co-wrote with Louis Jenkins; Countess Olivia in Twelfth Night; Richard III; Valere in La Bête and Robert in Boeing-Boeing. He won Best Actor Tony Awards® for Twelfth Night, Jerusalem and Boeing-Boeing; Best Actor Olivier Awards for Jerusalem and Much Ado About Nothing. Throughout his career, he has acted in more than 50 productions by Shakespeare and his contemporaries. Rylance shot to worldwide fame with his foray into major films and TV, most notably his Oscar® and BAFTA-winning performance as Rudolf Abel in Bridge of Spies and the critically acclaimed Wolf Hall, directed by Peter Kosminsky. His portrayal of Thomas Cromwell garnered a BAFTA TV Award for Best Actor, Limited Series or Movie and an Emmy® nomination. Other film credits include Dunkirk, The Trial of the Chicago 7, The BFG, and Ready Player One. His latest roles in Terrence Malick’s The Last Planet, Craig Roberts’ The Phantom of The Open and Adam McKay’s Don’t Look Up!, are to be released later in the year or 2022. He recently finished filming in Graham Moore’s The Outfit, and Luca Guadagnino’s Bones and All.

Mackenzie Crook is a multi-award-winning actor, writer and director. His awards include two BAFTAs, a Writers Guild Award and a Rose D’Or Award. He was nominated for a Tony Award and an Olivier Award when he first co-starred in Jerusalem in 2011. Crook received huge critical acclaim as a writer, director and actor for his BBC shows Detectorists and Worzel Gummidge. His other theatre credits include Ian Rickson’s Royal Court production of The Seagull in the West End and on Broadway, One Flew Over The Cuckoo’s Nest at the Garrick Theatre and The Exonerated at Riverside Studios. His film credits include three Pirates of the Caribbean films, Brothers Grimm, Finding Neverland, The Life and Death of Peter Sellers, City of Ember, Sex, Drugs and Rock ‘n’ Roll and The Adventures of Tin Tin to name but a few. His other television credits include The Office, Merlin, Skins, Little Dorritt, Demons and Britannia (as actor, writer and director).

In 1995 Jez Butterworth’s first play Mojo won seven major awards, including the Olivier Award for Best Comedy. His other plays include The Night Heron (2002), The Winterling, (2006), Parlour Song (2008) Jerusalem (2009) The River (2012) and The Ferryman (2017). Jerusalem won Best Play at the Evening Standard Awards, before travelling to Broadway where it received six Tony nominations, winning two, including Best Actor for Mark Rylance. The Ferryman won Best Play and Best Director at the Evening Standard Theatre Awards and three Olivier Awards for Best Director, Best Play and Best Actress. It transferred to Broadway and was nominated for nine Tony Awards, winning four including the award for Best Play. For film Butterworth has written dozens of screenplays for stars such as Sean Penn, Naomi Watts, Tom Cruise, Emily Blunt, Johnny Depp, Dakota Johnson, Daniel Craig, Naomie Harris, Matt Damon and Christian Bale. For television he has created and written the comedy series Mammals for Amazon Studios starring James Corden, Sally Hawkins, Melia Kreiling and Colin Morgan. The six-part series will be released in 2022. Butterworth also created the historical fantasy drama Britannia for Sky, starring David Morrissey, Zoe Wanamaker and Mackenzie Crook, now in its third season.

Ian Rickson was the Artistic Director of the Royal Court from 1998 to 2006, where he directed Jerusalem (also West End and Broadway), The River (also Broadway), The Winterling, The Night Heron and Mojo (also Chicago), all by Jez Butterworth; Not Not Not Not Not Enough Oxygen and This is a Chair by Caryl Churchill; Dublin Carol and The Weir by Conor McPherson (also Dublin, Chicago, West End and Broadway); The Seagull by Anton Chekhov (also Broadway); Krapp’s Last Tape by Samuel Beckett; Alice Trilogy by Tom Murphy; The Sweetest Swing in Baseball and Boy Gets Girl by Rebecca Gilman; Fallout by Roy Williams; Mouth to Mouth by Kevin Elyot; The Lights by Howard Korder; Pale Horse and Some Voices by Joe Penhall; Ashes and Sand by Judy Upton and Killers by Adam Pernak. In the West End, Rickson has directed Uncle Vanya, The Birthday Party, Old Times, Betrayal and The Children’s Hour (all at the Harold Pinter Theatre); Edward Albee’s The Goat or Who is Sylvia? (Theatre Royal Haymarket); Rosmersholm (Duke of York’s Theatre); and at the National Theatre, Translations by Brian Friel, Evening at the Talk House by Wallace Shawn, The Red Lion by Patrick Marber, The Hothouse by Harold Pinter, and The Day I Stood Still by Kevin Elyot. Productions at the Old Vic include Electra by Sophocles. Productions at the Young Vic include The Nest, Now We Are Here and Hamlet. Productions at the Almeida Theatre include Against by Christopher Shinn and Parlour Song by Jez Butterworth. Ian was Artistic Director of SFP’s Re-Emerge season in the West End this year and directed for the stage and the filming of Walden, one of the three plays in this Season. Work on screen includes Fallout (Company Pictures for Channel 4) and Krapp’s Last Tape by Samuel Beckett (BBC4). Rickson also works with PJ Harvey and Kate Tempest on their music and poetry shows. Rickson has his own podcast, ‘What I Love’ for Storyglass.

Sonia Friedman Productions is an international production company responsible for some of the most successful theatre productions of recent years in the West End and on Broadway. Since 1990, Sonia Friedman OBE, with her company SFP, has developed, initiated and produced 180+ new productions, and has recently started developing and producing new work for TV. The work has won a combined 58 Oliviers, 30 Tonys and 2 BAFTAs.
Full details – soniafriedman.com

The Royal Court Theatre is the writers’ theatre. It is a leading force in world theatre for cultivating and supporting writers – undiscovered, emerging and established. Since 1956, we have commissioned and produced hundreds of writers, from John Osborne to Jasmine Lee-Jones. Royal Court plays from every decade are now performed on stage and taught in classrooms and universities across the globe. Through the writers, the Royal Court is at the forefront of creating restless, alert, provocative theatre about now. We open our doors to the unheard voices and free thinkers that, through their writing, change our way of seeing. Through all our work we strive to inspire audiences and influence future writers with radical thinking and provocative discussion.
royalcourttheatre.com

ENGLISH TOURING OPERA, the only English professional touring opera company, working on a minuscule Arts Council subsidy when compared to other, less … END_OF_DOCUMENT_TOKEN_TO_BE_REPLACED

TuckShop - the UK’s only specialist production company devoted all things drag - are back in the West End this Christmas with DICK WHITTINGTON, the … END_OF_DOCUMENT_TOKEN_TO_BE_REPLACED

Producer Stacey Mindich has announced the Olivier award-winning Company returning to Dear Evan Hansen next month. The London production reopens at the … END_OF_DOCUMENT_TOKEN_TO_BE_REPLACED

Global Creatures, the producer of Moulin Rouge! The Musical, is thrilled to announce today the cast for the UK premiere of the acclaimed show, which … END_OF_DOCUMENT_TOKEN_TO_BE_REPLACED