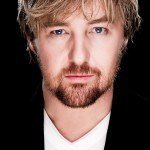 After last performing in the West End in 2011, John Owen-Jones will return to the London stage in March to play the role of ‘Pirelli’ in the English National Opera production of Sweeney Todd.

The critically acclaimed “staged concert” production was a sell-out for its short run at the Lincoln Center in New York last year and will have a strictly limited run of 13 performances at the London Coliseum Theatre from March 30th to April 12th. John will join previously announced stars Bryn Terfel (Sweeney Todd), Emma Thompson (Mrs Lovett) and Philip Quast (Judge Turpin).

The show will be directed by Lonny Price and the musical director is David Charles Abell.

Set in Victorian London, Sweeney Todd: The Demon Barber of Fleet Street tells the story of the eponymous barber who seeks vengeance on what he sees as a merciless world by murdering his customers and, with the help of his landlady, the romantically inclined Mrs. Lovett, bakes their bodies into meat pies, which are fed to London’s avid and unknowing populace. Sondheim’s score pays homage to the music of Hollywood composer Bernard Herrmann. Highlights include “The Ballad of Sweeney Todd,” “Not While I’m Around,” “A Little Priest,” and “Pretty Women.”

With music and lyrics by Stephen Sondheim and book by Hugh Wheeler from an adaptation by Christopher Bond, Sweeney Todd received its world premiere at the Uris Theatre on Broadway in March 1979, directed by Harold Prince and starring Len Cariou and Angela Lansbury. The show received eight Tony Awards including Best Musical, Best Book of a Musical and Best Original Score, as well as eleven Drama Desk Awards and the Drama Critics’ Circle Award for Best Musical.