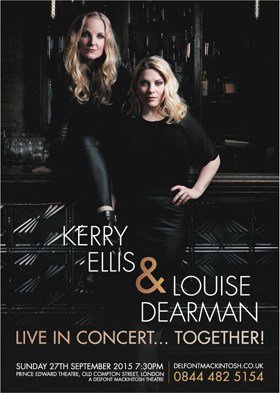 West End stars, Kerry Ellis and Louise Dearman announced today that they will be joining forces for a one-off concert at the Prince Edward Theatre in London’s West End. Kerry and Louise have known each other for nearly 20 years and have not duetted since leaving Laine Theatre Arts in 1998.

Between them they have played nearly every iconic leading female role including Elphaba in Wicked, Nancy in Oliver, Eva Peron in Evita, Grizabella in Cats to name but a few. Their careers haven’t allowed them to perform together….until now. They will be bringing their musical magic to the Prince Edward stage with an evening of iconic duets sung by two of the best leading ladies the West End has ever seen.

Kerry Ellis has fast become recognized as the First Lady of West End musicals from her starring roles in London and on Broadway. She originated the role of Meat, in Queen’s We Will Rock You and was the first British Elphaba in the West End smash, Wicked. She then immediately transferred to Broadway and played Elphaba at the Gershwin Theater for 6 months. Her many other leading role credits include Nancy in Oliver!, Eliza Doolittle in My Fair Lady, Ellen in Miss Saigon and Fantine in Les Miserables.

She is currently appearing as Grizabella in Cats. Alongside Kerry’s Musical career she’s also collaborated with Brian May, releasing albums and touring the world. Read our previous in-depth interview with Kerry Ellis

Louise Dearman is widely known through her many performances both on national tours and in London’s West End; joining the touring cast of Joseph and the Amazing Technicolor Dreamcoat in the role of the Narrator following, graduation. Career highlights since then include Sarah Brown for the national tour of Guys and Dolls, and Mimi in the Piccadilly Theatre production of the show; Lucy Harris in the UK tour of Jekyll and Hyde; Debbie in the 2007 Edinburgh Festival production of Debbie Does Dallas; Grizabella in the International production of Cats; Eva Peron in the UK touring production of Evita and becoming the first actress to star as both Glinda and Elphaba in the hit musical Wicked. Read our previous in-depth interview with Louise Dearman.

As well as both triumphing in Oz and the West End, both Kerry and Louise have sung in a variety of concerts, appeared on TV and radio and recorded albums. They are over the moon to finally work together and to celebrate the people and songs they admire. Kerry commented, “We are thrilled to be sharing the Prince Edward stage and have already started planning our set. We love each other’s work and can’t wait to sing together.” Louise added, “ It’s going to be an amazing night and we can’t wait to entertain our fans with a truly memorable evening for all of us!”

Kerry Ellis & Louise Dearman, Live In Concert…Together will take place on the evening of Sunday 27th September 2015. It will feature a live band and will be musically directed and arranged by Craig Adams. Tickets are now on sale priced from £35 (plus booking fee) at delfontmackintosh.co.uk, by calling 0844 482 5154 or in person at the Prince Edward Theatre.

The women clearly enjoy each other’s company and Kerry Ellis spent a lot of time cracking up over Louise Dearman’s comments at today’s press conference. They promise that this concert will reveal little known backstories about themselves and their friendship.