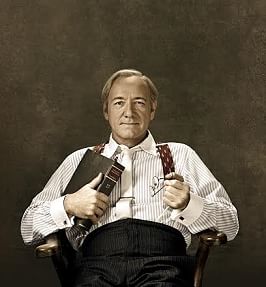 Commemorating his last time on The Old Vic stage whilst Artistic Director, Kevin Spacey, returns to the iconic role of Clarence Darrow following his sell-out and critically acclaimed run of 22 performances in 2014. Clarence Darrow previews from 3rd March for six weeks only until 11th April 2015.

In Rintels’ compelling one man play, the larger than life Darrow with his legendary wit relives some of his pivotal experiences, including the infamous Scopes ‘Monkey’ and ‘Thrill Killers’ trials which established his reputation as a courtroom giant and civil rights hero. Kevin Spacey’s performance was widely praised as a tour de force, and this production is back having only run for just over two weeks in 2014.

Kevin Spacey said “As my time at the helm of The Old Vic is drawing to a close, it felt the right choice to bring back Clarence Darrow. I had such a short run with the production last year and so many didn’t get the chance to see it, that it felt like a great opportunity to do a longer run.”

“Clarence Darrow is a role I’ve gotten to play three different times – in a 1992 film about his life, as the lawyer Drummond in Inherit the Wind and finally in the marvellous David Rintel’s one-man play, Clarence Darrow, last year. Perhaps it is true what they say, if you do something long enough you just might get good at it. I look forward to sharing Darrow’s remarkable, inspiring life one more time in London, as we build toward the excitement of Matthew Warchus taking on the role of Artistic Director at our beloved Old Vic.”

Clarence Darrow will be staged in the round, this ambitious project is once more made possible by the generous support of CQS. The season of productions is supported for the fourth consecutive year by Bank of America Merrill Lynch.

Kevin Spacey has previously appeared in The Old Vic’s productions Richard III, Speed-the-Plow with Jeff Goldblum, National Anthems, The Philadelphia Story, A Moon for the Misbegotten, which subsequently transferred to Broadway, and in Trevor Nunn’s productions of Inherit the Wind and Richard II. Previous theatre includes The Iceman Cometh (Evening Standard and Olivier Awards for Best Actor, and Tony Award nomination) directed by Howard Davies (Almeida, The Old Vic and Broadway), Lost in Yonkers (Tony Award, Best Supporting Actor), Long Day’s Journey into Night, with Jack Lemmon, directed by Jonathan Miller (Broadway and West End). He directed The Old Vic’s inaugural production Cloaca and directed Complicit starring Richard Dreyfuss. He is currently starring as Francis Underwood in the Netflix series House of Cards for which he recently won a Golden Globe.

Thea Sharrock won the James Menzies-Kitchin young director of the year award in 2000, making her directorial debut with a production of Caryl Churchill’s Top Girls which transferred to the West End and toured the UK twice. Thea was then made Britain’s youngest Artistic Director when she took over the Southwark Playhouse for three years, before then going on to be the Artistic Director of the Gate Theatre in Notting Hill. Thea directed Cause Célèbre at The Old Vic in 2011 with Anne-Marie Duff, her other credits include productions for the Almeida, the Donmar, the National Theatre and many in the West End including Equus with Daniel Radcliffe and Richard Griffiths (also Broadway), The Misanthrope with Keira Knightley and Heroes with John Hurt. Her production of After the Dance for the National Theatre won eight major awards. She has also directed Henry V starring Tom Hiddleston for Sam Mendes/Neal Street and the BBC, as well as the recent Christmas Special of Call the Midwife.

Recently on stage she directed Richard Griffiths in his last stage performance in The Sunshine Boys with Danny DeVito at the Savoy Theatre before directing her first musical, The Bodyguard at the Adelphi Theatre. She is currently directing Miranda Hart in her arena tour for 2014. She is delighted to be returning to The Old Vic where she has been an Associate since 2011.

David W Rintels is an award-winning writer. His accolades include the Writers Guild of America Award for the Outstanding Dramatic Script in 1970 and in 1971 the American Bar Association Gavel Award, he was also nominated for an Emmy that same year. Utilising his background in Law, Rintels has written extensively for many legal series on television including The Defenders, Slattery’s People, The Senator and The Young Lawyers.