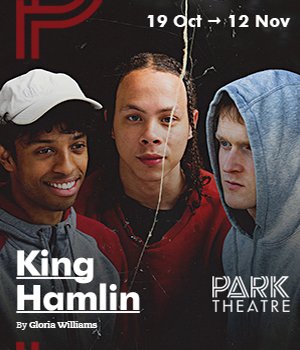 King Hamlin is the brand-new play from the team that presented Bullet Hole, by Gloria Williams, in 2018. Winner of best full-length stage play at Scriptwriters & Co International Festival.

When pride, revenge and turf wars are the daily norm, how do you walk away from a path that’s been marked out for you?

Hamlin, Quinn and Nic are young friends trying to get ahead in inner-city London.

After his dad dies, Hamlin’s goal is to finish school, get a good job, and build a better life for himself and his mum, Mama H. When live-wire Quinn and troubled Nic offer Hamlin easy money in return for some county line drug trafficking, his dreams, his mother’s hopes and the friendship of the three are put to the test. Will Hamlin stand his ground or end up on the wrong side of the tracks?

In a maze of inequality, unemployment and gang culture, it’s a struggle to know where to make a right turn and how to undo a wrong one.

Praise for Bullet Hole at Park Theatre:
“An incredibly important story to be told, and Williams tells it well, informing and educating the audience through wonderful performances by the whole cast” ★★★★ Afridiziak

'Look anyone will tell you, I’m a pretty straight sort of guy.' Tony Blair A reckless reappraisal of the life of former Ugly Rumours front man and … END_OF_DOCUMENT_TOKEN_TO_BE_REPLACED

Michael Harrison and the Really Useful Group are thrilled to announce that The Wizard of Oz, the musical based on the iconic story by L. Frank Baum, … END_OF_DOCUMENT_TOKEN_TO_BE_REPLACED

Following major demand for tickets, the Queen of comedy Dawn French has announced a host of new UK tour dates for her critically acclaimed live … END_OF_DOCUMENT_TOKEN_TO_BE_REPLACED