Kinky Boots the Musical in Concert will be stepping out and painting the town red for an extra night on Tuesday 9 August at the Theatre Royal Drury Lane this summer. 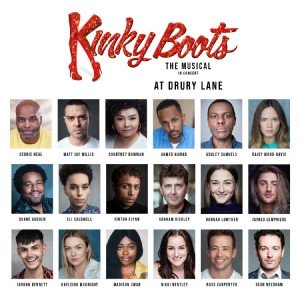 Kinky Boots is the feel-good musical by Harvey Fierstein and Cyndi Lauper, based on the popular 2005 film of the same name. Previously announced cast are Cedric Neal (Back To The Future, Motown The Musical), as Lola/Simon, Matt Jay Willis (Busted, Waitress, Wicked) as Charlie and Courtney Bowman (Legally Blonde, SIX) as Lauren.

The ensemble of Angels will be led by the Referee Angel, Ashley Samuels and include Eli Caldwell, Finton Flynn, Jayred Lempriere, Jordan Bennett and Ross Carpenter.

Winner of six TONY awards and the Olivier Award for Best New Musical in 2016, the hilarious and joyous musical returns to the West End for the first time in three years in concert form.

Adapted from Susan Hill’s classic book, The Woman in Black at the Fortune Theatre has been thrilling London audiences since 1989. In The Woman … END_OF_DOCUMENT_TOKEN_TO_BE_REPLACED

The producers of the multi-award-winning, critically acclaimed production of CABARET at the KIT KAT CLUB in London’s West End are thrilled to announce … END_OF_DOCUMENT_TOKEN_TO_BE_REPLACED

With well over three thousand productions at the Edinburgh Festival Fringe 2022, here’s my attempt at a list of recommendations. I Wish My Life … END_OF_DOCUMENT_TOKEN_TO_BE_REPLACED