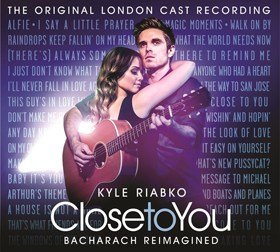 Ghostlight Records will release The Original London Cast Recording of KYLE RIABKO’s Close to You: Bacharach Reimagined in digital formats on Friday 24 June 2016, with two-disc physical copies online and in stores from Friday 1 July. Seen in New York and London, the show revitalises the catalogue of the iconic American composer for a new generation with Riabko’s visionary interpretations. The album also features special bonus tracks of Kyle’s never-before-heard original demos, which formed the basis for the project. The 28-page booklet includes a note from Riabko, liner notes, production and studio photography and opening night photos of Bacharach with the cast. Videos of the West End production’s trailer and the album’s recording session are available on YouTube. Close to You: Bacharach Reimagined is produced and arranged by Kyle Riabko with David Lane Seltzer of Entertainment 360 serving as executive producer.

Starting on Friday 3 June, customers that pre-order the album will immediately receive the two tracks “Close to You” and “Anyone Who Had a Heart / This Guy’s In Love with You.”

Close to You: Bacharach Reimagined is The Original London Cast Recording of the hit West End show which began Off Broadway, transferred to London’s Menier Chocolate Factory before making its West End Premiere at the Criterion Theatre in October 2015, breaking box office records with the biggest advance in the venue’s history. Featuring musician Kyle Riabko’s brilliant take on the genre-spanning catalogue of Burt Bacharach, with lyrics by Hal David and others, this critically acclaimed production was directed by Olivier Award-winning Steven Hoggett. The recording features over 30 hits as performed by Riabko and the other multi-talented young singers and musicians who made up the cast of this celebrated show. The album showcases beautifully-reimagined versions of classics such as “Alfie,” “I Say a Little Prayer,” “Walk On By,” “Raindrops Keep Fallin’ On My Head,” “The Look of Love,” “What’s New Pussycat?”, “I’ll Never Fall in Love Again,” “Don’t Make Me Over,” “(There’s) Always Something There to Remind Me,” “A House Is Not A Home,” and the enduring title track.

Burt Bacharach appeared at the show’s opening night in the West End, and said, “This is star musicianship. Kyle is a beautiful singer and one hell of a guitar player. This is truly a gift. It’s a love letter to me.”

KYLE RIABKO is a singer, guitarist, composer and actor who grew up in Saskatoon, Saskatchewan. Before starring on Broadway in both Spring Awakening and Hair, Kyle released a full-length album of original music on Columbia/Aware Records and spent his teen years appearing as an opening act for a wide range of artists including: B.B. King, James Brown, John Mayer, Keb’ Mo’, Buddy Guy, Jason Mraz and Maroon 5, among others.

CLOSE TO YOU: BACHARACH REVISITED TRACK LIST
DISC ONE
1 Introduction
2. Anyone Who Had A Heart / This Guy’s In Love With You
3. The Look Of Love / I Say A Little Prayer / Arthur’s Theme
4. Close To You
5. Psychedelic Interlude
6. I Come To You
7. Making Love
8. San Jose Interlude
9. The Windows Of The World / What The World Needs Now Is Love
10. Message To Michael / Do You Know The Way To San Jose
11. The Sundance Kid / Magic Moments / Trains and Boats and Planes
12. Don’t Make Me Over
13. Walk On By
14. A House Is Not A Home
15. Make It Easy On Yourself / Mash-Up (Magic Moments, Alfie, Making Love, This Guy’s In Love With You)

Following its multiple West End runs, and continuing success at its home – The Other Palace, Heathers the Musical will embark on its highly … END_OF_DOCUMENT_TOKEN_TO_BE_REPLACED

After creating the “absorbing and provocative” Version 2.0 and the “eminently lovable” Letters, Kashyap Raja returns to London with his new play Earth … END_OF_DOCUMENT_TOKEN_TO_BE_REPLACED