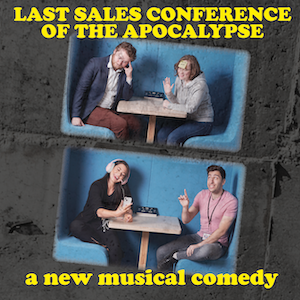 Sam, the head of IT startup “SupportMe” (current valuation, £8.74, if we include the half-used box of teabags) has just initiated a nuclear missile countdown with his bottom. This is scary, but also embarrassing. Utilising his team’s experience of prank-calling corporate helplines, Sam devises a plan to stop the launch.

The plan does not go well, and unhelpfully, Sam passes out. He enters his subconscious, imagining himself as a showrunner who directs his staff to play roles in TV franchises.

Forgotten memories from Sam’s childhood start to emerge, memories that were locked away for good reason. Increasingly, Sam’s head becomes a battleground between himself and the rest of his team. Can Sam connect back to his lost memories and stop the impending apocalypse?

Featuring fifteen original songs, an LGBTQ cast and with voice and weekend guest appearances of Marcus Bentley (from Big Brother) as the Voice of God, Last Sales Conference of the Apocalypse explores the long-term impact of domestic violence and conversion therapy through comedy, music, drama and suspense.

The show runs all of October, Tuesday to Saturday at 7:30pm, with matinee performances on Sunday at 4pm.

Ambassador Theatre Group Productions are delighted to announce a UK and Ireland Tour of the pantomime MOTHER GOOSE. The first of its kind to tour the … END_OF_DOCUMENT_TOKEN_TO_BE_REPLACED

The National Theatre’s new musical Hex returns to the Olivier theatre for Christmas, after its original 2021 opening was delayed due to covid. The … END_OF_DOCUMENT_TOKEN_TO_BE_REPLACED

As it celebrates its 8th anniversary in the West End, The Play That Goes Wrong, the Olivier Award-winning smash hit announces an extension to the … END_OF_DOCUMENT_TOKEN_TO_BE_REPLACED

Producer Josh Andrews has today announced the lead cast for the UK tour of Peter James’ Wish You Were Dead: George Rainsford, will star as James’ … END_OF_DOCUMENT_TOKEN_TO_BE_REPLACED