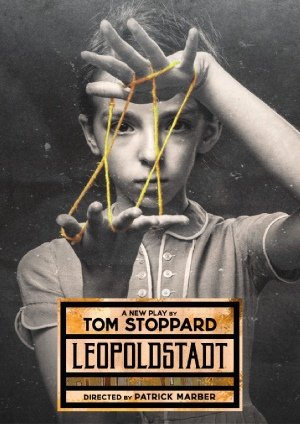 Previewing at Wyndham’s Theatre from 25 January 2020, Leopoldstadt will run for 16 weeks only until 16 May with opening night on 12 February 2020. Public booking will open on 28 June 2019 at 10am for this strictly limited run, and tickets will be available from £15. To sign up for priority booking and to register interest please visit leopoldstadtplay.com. Full creative team and casting to be announced at a later date.

Internationally award-winning writer Tom Stoppard’s plays include Rosencrantz and Guildenstern are Dead, The Real Inspector Hound, After Magritte, Jumpers, New Found Land, Dogg’s Hamlet, Cahoot’s Macbeth, Travesties, Every Good Boy Deserves Favour (a play for actors and orchestra written with André Previn), Night and Day, The Real Thing, Hapgood, Arcadia, Indian Ink, The Invention of Love, The Coast of Utopia, Rock ‘n’ Roll and, most recently, The Hard Problem. His radio plays include Albert’s Bridge, Artist Descending a Staircase, The Dog It Was That Died, If You’re Glad I’ll Be Frank, and most recently, his dramatic imagining of Pink Floyd’s Darkside of the Moon, Darkside. As well as for the stage and radio, Stoppard is an award-winning writer for film and television.

Patrick Marber’s directing credits of his own work include Dealer’s Choice at the National Theatre and Vaudeville Theatre, After Miss Julie for BBC TV, Closer at the National Theatre, Lyric and Music Box, New York, Howard Katz and Three Days in the Country also at the National Theatre and Don Juan in Soho at Wyndham’s Theatre. His other directing credits include The Room as part of the Pinter at the Pinter Season, Venus In Fur at the Theatre Royal Haymarket, Travesties at the Menier Chocolate Factory, Apollo Theatre and The American Airlines Theater, New York, for which he was nominated for a Tony Award for Best Director, The Caretaker at the Comedy Theatre, Blue Remembered Hills at the National Theatre, ‘1953’ at the Almeida and The Old Neighborhood at the Royal Court Theatre. Marber’s plays, which have received multiple awards both in the West End and on Broadway, include Dealer’s Choice, After Miss Julie, Closer, Howard Katz, Three Days in the Country, The Red Lion and a version of Hedda Gabler. He is also an award-winning screenwriter and his film credits include Closer and Notes on a Scandal.

Sonia Friedman Productions is an international production company responsible for some of the most successful theatre productions of recent years. Since 1990, Sonia Friedman OBE and SFP have developed, initiated and produced 160+ new productions and won a combined 55 Oliviers, 30 Tonys and 2 BAFTAs. Recent West End and Broadway productions include the UK premiere of The Book of Mormon, Harry Potter and the Cursed Child, Mean Girls, Fiddler on the Roof, Rosmersholm, All About Eve, Dreamgirls, The Jungle, The Ferryman, Farinelli and the King, Travesties, 1984 and The Book of Mormon UK & International tour. Upcoming productions include Harry Potter and the Cursed Child in San Francisco, Hamburg and Toronto and The Inheritance in New York. soniafriedman.com

Cirque du Soleil has announced the London run for one of its most critically acclaimed touring show KURIOS— Cabinet of Curiosities. Opening on 13th … END_OF_DOCUMENT_TOKEN_TO_BE_REPLACED

Ambassador Theatre Group Productions are delighted to announce a UK and Ireland Tour of the pantomime MOTHER GOOSE. The first of its kind to tour the … END_OF_DOCUMENT_TOKEN_TO_BE_REPLACED

The National Theatre’s new musical Hex returns to the Olivier theatre for Christmas, after its original 2021 opening was delayed due to covid. The … END_OF_DOCUMENT_TOKEN_TO_BE_REPLACED