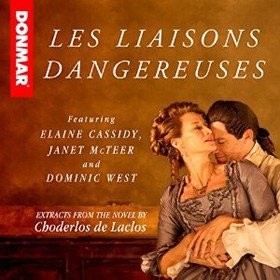 An intimate audiobook featuring extracted love letters from the infamous book reveals the passion and betrayal of Les Liaisons Dangereuses.

A brand new audio adaptation delving into Choderlos de Laclos’ infamous novel of seduction, intrigue and revenge, Les Liaisons Dangereuses – starring the cast of the current sold-out London theatre production at the Donmar Warehouse, including Elaine Cassidy (The Paradise), Janet McTeer (The Honourable Woman) and Dominic West (The Wire, The Affair) – is available to download for free at audible.co.uk/Donmar from 28th January, 2016.

In partnership with the Donmar Warehouse’s highly acclaimed theatre production – adapted for the stage by Christopher Hampton and directed by Josie Rourke – Audible UK are offering a free exclusive audio recording of extracted letters featured within the original book. Providing intimate insight into the relationships between the characters, this new audiobook complements both the stage production and its live broadcast in cinemas on Thursday 28th January in partnership with National Theatre Live.

Dominic West (who plays Le Vicomte de Valmont) says, “It’s a story that has stood the test of time – I think that’s partially because it’s highly erotic, and that doesn’t age, but it’s also surprisingly modern in the way it portrays women. It’s a feminist play; a battle of the sexes where they are equally matched. Or if anything, the female is the deadlier of the two! There is a great dramatic irony to Valmont as a character because he’s actually desperate to find love – he tells Tourvel he’s fallen in love with her under the guise of seducing her, when in reality it’s the truth.”

Steve Carsey, Director of Original Content at Audible UK, says, “Letters are such a personal form of communication, and reading them out loud is almost like whispering sweet nothings into the audience’s ear. Never has this been more true than with Les Liaisons Dangereuses. The characters are so intertwined with lies and lust. It’s such an infamous narrative – and this stage production is such a fantastic homage to the original book – that we were keen to offer an extended and deeper experience. We hope that anchoring the play with this unique audio recording of the original book’s letters will really give the audience something extra to get their teeth into.”

Les Liaisons Dangereuses audiobook was directed and edited for audio by Zoé Ford and produced by Mariele Runacre Temple for Audible UK.

About Les Liaisons Dangereuses – the book:
In 1782, Choderlos de Laclos’ epistolary novel of sex, intrigue and betrayal in pre-revolutionary France scandalised the world. A collection of letters, the narrative is told through the personal correspondence between the characters, allowing the reader an intimacy to the drama as it unfolds.

The story follows former lovers, the Marquise de Merteuil and Vicomte de Valmont, as they compete in games of seduction and revenge. Merteuil incites Valmont to corrupt the innocent Cécile de Volanges before her wedding night, but Valmont has targeted the peerlessly virtuous and beautiful Madame de Tourvel. However, while these merciless aristocrats toy with others’ hearts and reputations, their own may prove more fragile than they supposed.