Smith and Brant Theatricals and Ambassador Theatre Group Productions have announced casting for the second leg of a new production of Fatal Attraction based on the classic Paramount Pictures Corporation film. From Wednesday 9th March (New Theatre, Cardiff) acclaimed actress, musician, TV presenter and Strictly Come Dancing star Louise Redknapp joins Oliver Farnworth (Dan Gallagher) as his wife, Beth and Susie Amy who takes on the role of Alex Forrest when Kym Marsh concludes her run in the tour on Saturday 5th March 2022. 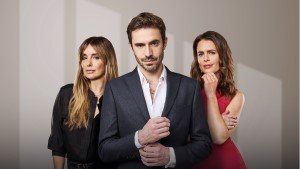 LOUISE REDKNAPP is a musician, TV presenter, actress and fashion influencer. Louise rose to prominence as a member of the girl band Eternal, before embarking on a highly successful solo career. Eternal were the first all-girl group to sell over 1 million copies of an album in the UK with their debut Always & Forever and remain the top selling girl band of the 90’s with over 10 million records sold.

Louise went solo in 1995 and her first album, Naked, produced 5 hits and sold over 1 million copies. In 2016, Louise was announced as a contestant for the BBC’s flagship show Strictly Come Dancing. Here, she stormed her way to the finals and was named runner-up. The following year, she made her stage debut starring as Sally Bowles in Cabaret (National Tour) with Will Young and in 2019 made her West End debut in Dolly Parton’s 9 to 5 The Musical (Savoy Theatre) as Violet Newstead, a role she reprised to great acclaim for the tour which ran throughout 2021. Please click HERE for Louise’s full biography. www.louiseofficial.co.uk

Fatal Attraction is the latest grip-the-edge-of-your-seat thriller from the producers of the celebrated tours of Patrick Hamilton’s Gaslight and Patricia Highsmith’s Strangers on a Train. Fatal Attraction is written by James Dearden, who based the stage play on his Oscar-nominated screenplay, which in turn was adapted from his 1980 short film, Diversion. This brand-new production is directed by Loveday Ingram with Rachel Heyburn as Assistant Director. Fatal Attraction features Set and Costume Design by Morgan Large, Projection Design by Mogzi, Lighting Design by Jack Knowles, Sound Design by Carolyn Downing and Paul Englishby is the show’s Composer. Fatal Attraction has been cast by Anne Vosser.

One of the most iconic films of the era, Fatal Attraction was one of 1987’s highest-grossing US Box Office release, securing six major Oscar nominations at the following year’s Academy Awards, including: Best Actress for Glenn Close’s mesmerising depiction of urbane sophisticate Alex Forrest, Best Supporting Actress (Anne Archer), Best Writing Adapted Screenplay (James Dearden), Best Director (Adrian Lyne), Best Editing, and Best Picture. Michael Douglas – at the peak of his Hollywood powers – was omitted from the list only as he was nominated elsewhere in the Best Actor category for his role as Gordon ‘greed is good’ Gecko in Wall Street, which he went on to win. Fatal Attraction’s success was such that the film inspired a generation of psychosexual thrillers in the years that followed.

CURRENT CAST Kym Marsh performs in the role of Alex Forrest, Susie Amy the role of Beth Gallagher and Oliver Farnworth that of Dan Gallagher until Saturday 5th March.

CAST CHANGE Susie Amy will perform the role of Alex Forrest, Louise Redknapp the role of Beth Gallagher and Oliver Farnworth that of Dan Gallagher from Wednesday 9th March onwards.

Andrew Lloyd Webber’s The Phantom of the Opera has returned to its home, Her Majesty’s Theatre London. Experience the thrill of the West End’s most … END_OF_DOCUMENT_TOKEN_TO_BE_REPLACED

The full cast is announced today for the 40th Anniversary tour of Michael Frayn’s multi-award-winning farce, Noises Off, which will open at Theatre … END_OF_DOCUMENT_TOKEN_TO_BE_REPLACED

Adapted from Susan Hill’s classic book, The Woman in Black at the Fortune Theatre has been thrilling London audiences since 1989. In The Woman … END_OF_DOCUMENT_TOKEN_TO_BE_REPLACED

The producers of the multi-award-winning, critically acclaimed production of CABARET at the KIT KAT CLUB in London’s West End are thrilled to announce … END_OF_DOCUMENT_TOKEN_TO_BE_REPLACED