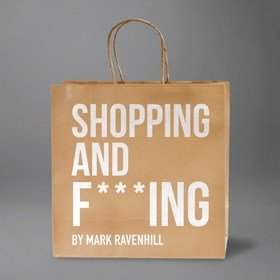 20 years since its premiere at the Royal Court, Mark Ravenhill’s powerful and provocative Shopping and F***ing comes to the Lyric this autumn in a new production directed by Sean Holmes.

As the Lyric’s smash-hit Bugsy Malone, returns to the stage for a limited 12 week run, the theatre announces a new production to complete their autumn season – Mark Ravenhill’s Shopping and Fucking. The Lyric’s main house will be transformed for this production with part of the audience seated on the stage, creating a bold intimate experience within their Victorian auditorium.

This autumn the Lyric is also pleased to welcome back Frantic Assembly to the main stage with their new production Things I Know to be True by leading Australian playwright Andrew Bovell, which premiered to critical acclaim in Adelaide in May. An exciting international co-production with the State Theatre Company of South Australia, Things I know to be True is co-directed by Scott Graham and Geordie Brookman. Over the festive season Panto returns to the Lyric when Aladdin flies into Hammersmith on his magic carpet. Written by Joel Horwood, Aladdin will be full of colourful characters, live music, lots of laughs and of course the magical Genie.

The Lyric’s Artistic Director Sean Holmes said: ‘It’s a privilege and a delight to stage the 20th anniversary production of Mark Ravenhill’s prophetic play. What is the internet now if it isn’t shopping and fucking?’

‘It’s summer. I’m in a supermarket. It’s hot and I’m sweaty. Damp. And I’m watching this couple shopping. I’m watching you. And you’re both smiling. You see me and you know sort of straight away that I’m going to have you.’

With a raw mixture of black humour and bleak philosophy, the play follows three disconnected young adults whose lives have been reduced to a series of transactions in an emotionally shrink wrapped world. A place where Shopping is sexy and Fucking is a job.

‘An omen of the new century’ (Evening Standard), Ravenhill’s play is a prophetic vision of our twenty-first century world. Widely regarded as one of the most influential pieces of contemporary British theatre this rarely staged play is a must see.

The Lyric’s main house will be transformed for this production with part of the audience seated on the stage, creating a bold intimate experience within their Victorian auditorium. All stalls and onstage stalls seats will be £25.

Mark Ravenhill said “I’ve enjoyed a long and fulfilling association with the Lyric – Faust Is Dead (1997), Handbag (1998), Pool (2005), Show 6 (2015) for the Lyric’s Secret Theatre – and so it’s very exciting that they are reviving my first play Shopping and Fucking, twenty years after it premiered. I’m looking forward to seeing what a new generation of theatre audiences make of the play.”

Following its multiple West End runs, and continuing success at its home – The Other Palace, Heathers the Musical will embark on its highly … END_OF_DOCUMENT_TOKEN_TO_BE_REPLACED

After creating the “absorbing and provocative” Version 2.0 and the “eminently lovable” Letters, Kashyap Raja returns to London with his new play Earth … END_OF_DOCUMENT_TOKEN_TO_BE_REPLACED