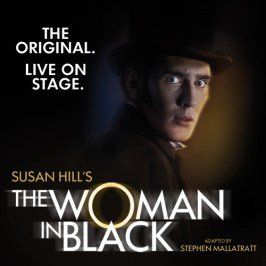 A new cast will take to the stage of the Fortune Theatre this evening in The Woman In Black, one of the most exciting, gripping and successful theatre events ever performed, now in its 27th year in the West End in a production revisited by original director Robin Herford.

Malcolm James reclaims the role of Arthur Kipps after starring in the national tour of The Woman in Black. His recent theatre credits include Birdsong (national tour), Equus (London Classic Theatre), Potting Shed (Finborough Theatre), The Importance of Being Earnest, Private Fears in Public Places, My Night With Reg (all Library Theatre) and The Lady in the Van (Salisbury Playhouse).

Matt Connor makes his West End debut in The Woman In Black. His previous roles include Sons of the Desert (Royal Court Liverpool), The Glass Menagerie (Chipping Norton Theatre), 101 Dalmatians, Around the World in 80 Days and A Christmas Carol all New Vic). On screen he has appeared in Doctors (BBC), Coronation Street (Granada) and Hollyoaks (Lime Pictures).

Unanimously acclaimed by the critics, The Woman In Black combines the power and intensity of live theatre with the cinematic quality of film noir. More than seven million people have been transported into a terrifying world in an unremitting drama that has them literally jumping out of their seats.

The Woman In Black was first performed at the Theatre-By-The-Sea in Scarborough in 1987. The original production received rave reviews, paving the way for future productions throughout the country. It reached the West End in 1989 where it has been a major success ever since. Its success has subsequently reached a global level, having spread to the US, South America and through to the Tokyo theatre scene, and beyond.

A major motion picture version of The Woman In Black was released in February 2012, starring Daniel Radcliffe. It became the highest-grossing British horror film ever, taking more than $100 million worldwide.

Book The Woman In Black Tickets for The Fortune Theatre in London’s West End.

Sonia Friedman Productions has announced that Ruth Wilson will star in Ivo van Hove’s adaptation of Jean Cocteau’s The Human Voice, which he also … END_OF_DOCUMENT_TOKEN_TO_BE_REPLACED

The award-winning smash-hit production of Girl From The North Country, written and directed by celebrated playwright Conor McPherson (The Weir, The … END_OF_DOCUMENT_TOKEN_TO_BE_REPLACED

John Barrowman is back on tour with his new show ‘I am What I am’ The tour launches on Saturday 30 April, 2022 at Southend‘s Cliff’s Pavilion and … END_OF_DOCUMENT_TOKEN_TO_BE_REPLACED

Producer Karl Sydow has announced the West End return of a dazzlingly renewed version of Dirty Dancing - The Classic Story On Stage, following a … END_OF_DOCUMENT_TOKEN_TO_BE_REPLACED