Marilyn and Sinatra: you know their names but you didn’t know their intimate love story…until now! 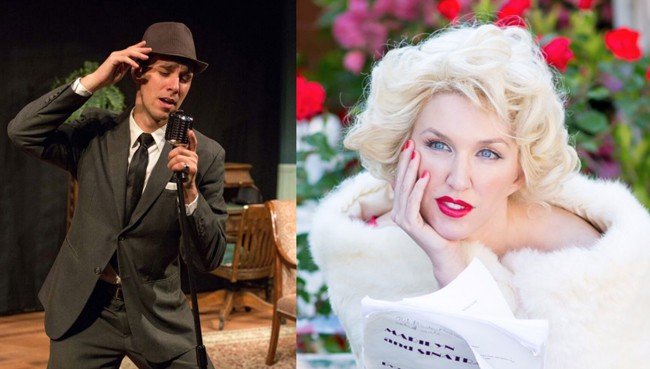 This acclaimed new play tells the little known, exhaustively researched, story of the relationship between showbiz icons Marilyn Monroe and Frank Sinatra, who lived together for five tempestuous weeks in 1955 and remained close right up until her death. On the night she died, Marilyn played nothing but Sinatra albums on her record player. It turns out the last voice she heard meant a great deal to her.

Marilyn & Sinatra stars Erin Gavin (Footballer’s Wives) as Marilyn Monroe and an America’s Got Talent finalist Jeff Bratz as Frank Sinatra. It is written and directed by Sandro Monetti. It is co-produced by Sandro Monetti and Jason Haigh-Ellery in association with Erin Gavin.

Playwright and director Sandro Monetti said: “Ever since I was a kid growing up in Blackpool, I’ve been fascinated by Americana, especially showbiz icons. Marilyn and Frank Sinatra have always intrigued me but I thought every story about them had been told. Then I discovered that they lived together in Beverly Hills for five disastrous weeks in 1955. It was just after his heartbreaking split from Ava Gardner. He’d lost, to his mind, the most beautiful woman in the world. And then God sent him the sexiest. But their time together was like The Odd Couple. He was a neat freak; she was messy. It was never going to work out. It seems the sex was great but the relationship was a disaster!”

Raised in Glasgow but now resident in Los Angeles, Erin Gavin is the definitive Marilyn having played the part in numerous productions and projects in the US. Her TV credits include Footballer’s Wives, Taggart and Still Game and she has worked with Michelle Pfeiffer, David Schwimmer and Elijah Wood.

Trained jazz musician Jeff Bratz was a top 12 finalist on America’s Got Talent. His stage roles include the Emcee in Cabaret, Dr Frankenfurter in The Rocky Horror Show, Judas in Godspell, The 39 Steps and West Side Story. He is lead singer in the rock band Radium.

Sandro Monetti- Playwright, Director & Producer
Sandro has built a career chronicling the lives of the famous as a leading international showbiz journalist, the author of bestselling biographies of Mickey Rourke and Colin Firth, an entertainment expert on close to 100 TV shows and host of live interviews on stage with stars like Sylvester Stallone and Al Pacino. He is currently seen weekly on CNN, also heard on BBC 5 Live and Talk Sport and is managing editor of the Los Angeles Business Journal. Sandro’s previous plays are Les Miserables parody musical Miserable Lesbians and his autobiographical one man show
Clooney, Cowell, Pitt and Me.

Jason Haigh-Ellery – Producer
Jason founded Big Finish Productions in 1998 and the company has grown to be the largest independent producer of Audio Drama in the world, working regularly with media corporations such as the BBC, MGM and ABC on Doctor Who, Torchwood, Stargate, Judge Dredd. In 2013, Big Finish won the BBC Audio Drama Award for Best Drama for Doctor Who. In 2011, Jason founded animation house Planet 55 Studios in Sydney, Australia, working first with the BBC on two animated versions of Doctor Who and now producing the original 26-part drama Prisoner Zero for ABC. Four other shows are in development. He has produced two reality shows Nadia Goes to Hollywood and Nadia: Chasing the Dream for TV3 and been involved with reality shows Strictly Dance Fever (BBC) and Fame – the Musical (RTE). A pilot for a new teen television drama is being shot for an Australian broadcaster in September 2016. In theatre Jason has produced 21 touring shows and 12 West End shows including Footloose – the musical, The Ladykillers, Yes Prime Minister, New Boy and Never Forget – the Take That musical.

Following its multiple West End runs, and continuing success at its home – The Other Palace, Heathers the Musical will embark on its highly … END_OF_DOCUMENT_TOKEN_TO_BE_REPLACED

After creating the “absorbing and provocative” Version 2.0 and the “eminently lovable” Letters, Kashyap Raja returns to London with his new play Earth … END_OF_DOCUMENT_TOKEN_TO_BE_REPLACED