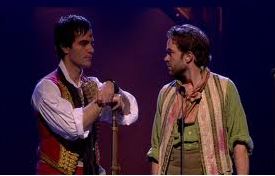 After what seems like an eternity of waiting, the much anticipated Matilda the Musical is in its new West End home at the Cambridge Theatre and last night, invited its first audiences over for its opening preview.

Written by Dennis Kelly and with music/lyrics by Tim Minchin, Matilda was a mammoth success for the RSC in Stratford earlier this year, where it originally played before its West End transfer. Based on the popular children’s book by Roald Dahl, which has already spawned a film version starring Danny DeVito, it tells the story of child-prodigy Matilda, who discovers she has the power of telepathy. Throw in a couple of negligent parents, a tender-hearted teacher and the scariest headmistress you’ll ever meet and you have everything needed to make a great musical.

Having already made the longlist for the 2011 Evening Standard Theatre Awards – nominated in three categories, including Best Musical – Matilda is expected to be nothing less than a hit sensation in its West End lodgings. I’ll be visiting the musical myself next week to review it for the site, so check back here then to see what I made of it!

In other theatre news, it has been confirmed that Ramin Karimloo is taking over from Alfie Boe to play Jean Valjean in Les Miserables from 29th November 2011 to 3rd March 2012.

Alfie Boe, who first performed as Jean Valjean in the Les Miserables 25th Anniversary concert last year, ends his five-month run at the Queen’s Theatre at the end of November. Speculation was rife that alternate Jonathan Williams – who has received great acclaim for his performances – would be offered the role full-time, but it seems he will be leaving with Boe when both their contracts end.

Karimloo performed as Enjolras in the Les Miserables 25th Anniversary concert, but he first joined Les Miserables eight years ago when he understudied pal Hadley Fraser as Marius. The two have remained friends since their time together in the show (even forming a folk/bluegrass band: Sheytoons) and, with Fraser currently playing the role of Javert, they will be reunited again. This time, however, there’s no sharing of roles; they will be playing opposite one another as the escaped convict and the policeman who pursues him.

Fans recently had a taste of Karimloo and Fraser going head to head in ‘Phantom 25’, where Karimloo’s ‘Phantom’ and Fraser’s ‘Raoul’ battled for the love of beautiful soprano, Christine Daae (Sierra Boggess). Both are tremendous actors with voices to match and fans are already excited at the prospect of seeing them on stage together once more.

Jean Valjean is one of the greatest leading roles in the West End; one which many musical theatre actors aspire to. It involves a lot of physicality and stage-time however and, vocally, is a very demanding role. Over the years we’ve had some memorable Valjeans (Colm Wilkinson and John Owen Jones being the first names that spring to most people’s minds) and some that, quite frankly, you hope to forget! I reckon Ramin Karimloo’s Valjean will be one that you’ll definitely want to remember though.

Regent’s Park Open Air Theatre have today confirmed the casting for the title roles in Romeo and Juliet, which opens the 2021 season on Thursday 17 … END_OF_DOCUMENT_TOKEN_TO_BE_REPLACED

Andrew Lloyd Webber’s The Phantom of the Opera returns to its home, Her Majesty’s Theatre London, from 27th July. Experience the thrill of the West … END_OF_DOCUMENT_TOKEN_TO_BE_REPLACED