On Monday 28th February at 11am, the Cambridge Theatre London, home of Matilda The Musical, will host World Book Day Live with Matilda and friends a special live-streamed event to celebrate World Book Day’s 25th birthday. Long-term partners Roald Dahl Story Company, Royal Shakespeare Company and Puffin are working together to ensure children everywhere can join in the fun. Classrooms and homes across the UK will be able to access the livestream from 11am via WorldBookDay.com. 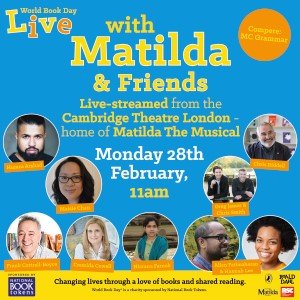 A special performance from the RSC’s Matilda The Musical will kick off the World Book Day birthday celebrations. For over 10 years, Olivier award-winning Matilda The Musical has celebrated the joy of reading through Roald Dahl’s book-loving heroine. Written by Dennis Kelly, with music and lyrics by Tim Minchin and developed and directed by Matthew Warchus, the theatre production is designed by Rob Howell and is an anarchic tribute to the magic of stories. Matilda The Musical has won 99 international awards including 24 for Best Musical and has been seen by more than 10 million people across more than 90 cities worldwide.

World Book Day Live with Matilda and friends will also feature an extract from Roald Dahl’s book Matilda read by a member of the cast of Matilda The Musical. Originally released in 1988, Matilda by Roald Dahl has sold over 18 million copies and remains the best-selling fiction title featuring a strong young heroine in the last 30 years. As a character, Matilda Wormwood is the ultimate bookworm but she is even more than that. Matilda, both the character and the book, is a perfect example of how reading changes lives.

With the upcoming film adaptation from the same core creative team as the theatre production (direction by Matthew Warchus, adapted for the screen by Dennis Kelly, with the music and lyrics of Tim Minchin), Roald Dahl’s themes of bravery and standing up for what you believe in will continue to inspire young audiences all over the world. Produced by Tim Bevan and Eric Fellner of Working Title, Jon Finn, and Luke Kelly of The Roald Dahl Story Company. Sony Pictures U.K. and Tristar Pictures will release Matilda across the U.K. and Ireland exclusively in cinemas on 2nd December 2022 for Christmas. Netflix will release the film in the rest of the world in December 2022.

After sell-out runs at Hope Mill Theatre, Manchester, and The Park Theatre, London, in 2022, Maureen Lipman returns to the West End with a performance … END_OF_DOCUMENT_TOKEN_TO_BE_REPLACED

THE PHANTOM OF THE OPERA at Her Majesty’s Theatre today announces Jon Robyns as ‘The Phantom’ from Monday 3 April 2023, Holly-Anne Hull as ‘Christine … END_OF_DOCUMENT_TOKEN_TO_BE_REPLACED

2023 marks the 50th Anniversary of the legendary smash hit musical The Rocky Horror Show, as it continues to play a newly extended tour through 2023 … END_OF_DOCUMENT_TOKEN_TO_BE_REPLACED