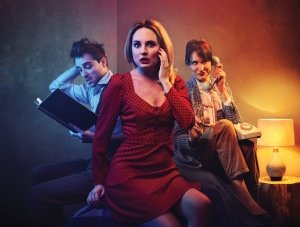 Camp Rock star Meaghan Martin is set to make her professional stage debut in Tony Award-winning playwright Christopher Durang’s dark comedy The Actor’s Nightmare. The piece, specially curated from a selection of Durang’s shorts by 3 hearts canvas into a cohesive, stand-alone piece, explores different areas of the entertainment industry through biting satire and surreal comedy. The production runs from 16th July to 10th August 2019, with the official press night being held on Friday 19th July at 7pm.

The Actor’s Nightmare offers snapshots of the eccentric and absurd, as audiences are offered an insight into the madness of the entertainment industry and all the things that those involved in it love to hate. From Tennessee Williams to Euripides, tossing in a bit of Beckett, no renowned playwright is safe. Classic plays are warped and distorted, with an outcome that is both shocking and hilarious. The World Premiere of this curated piece includes the UK Premiere of some of Durang’s finest works including Mrs Sorken and Desire, Desire, Desire.

The production is directed by Lydia Parker, artistic director of Over Here Theatre Company which produced ObamAmerica, (Theatre503), Our American Cousin and Dolphins and Sharks (Finborough Theatre) both of which she also directed. Other work includes Our Children Will Be Next (Theatre503), Superman and Me (Canal Café), Something There That’s Missing (Edinburgh Festival) Skinhead (Brockley Jack Studio), A Big Fridge and Other Plays by James Fritz (Hen and Chickens), All I Need Is a F**k Buddy (Canal Café). She frequently directs for Little Pieces of Gold. She has previously written comedy for BBC Radio 4 with Maureen Oakeley and now writes and directs comedy music web series The Band Formerly Known As with her musician daughter Sabrina Parker.

After creating the “absorbing and provocative” Version 2.0 and the “eminently lovable” Letters, Kashyap Raja returns to London with his new play Earth … END_OF_DOCUMENT_TOKEN_TO_BE_REPLACED