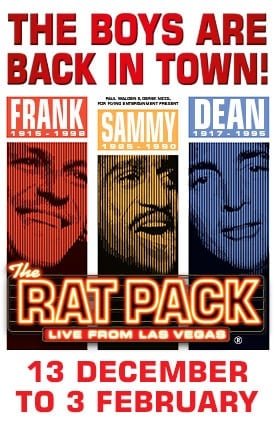 Final casting is announced today for the West End production of the Olivier Award-nominated The Rat Pack – Live from Las Vegas, which returns to the Theatre Royal, Haymarket – home to its first West End run in 2003 – for a strictly limited season from Wednesday 13th December 2017 – Saturday 3rd February 2018.

Nicola Emmanuelle will also join the show from Tuesday January 9 to celebrate the 100th anniversay of the birth of the First Lady of Song and Queen of Jazz, Ella Fitzgerald. Songs featured in this special edition of the production will include Night and Day, The Lady is a Tramp, Mack the Knife and S’Wonderful.

The original show updated
At the start of the 1960s, The Rat Pack led by Frank Sinatra, Dean Martin and Sammy Davis Jr. were the toast of Las Vegas. With the world’s rich and famous jetting in to see them joke around and sing some of the finest songs ever written, the guys also starred together in a series of glamorous Hollywood films, set fashion trends, rubbed shoulders with the US President, politicians and mobsters… and partied hard as the coolest cats on the planet. The Rat Pack – Live from Las Vegas recreates that special time. Prepare to drift back in time to an era of glitzy nights spent on the Vegas strip in the company of three of the world’s most popular entertainers. This spectacular production – with a very special Christmas theme until 6 January – celebrates the incredible singing talent of three world-famous entertainers and performers and some of the finest music and song that has ever been recorded. Frank, Sammy and Dean are once again performing in the world-renowned Copa Room at the famous Sands Hotel, supported by the fabulous Burrelli Sisters and The Rat Pack Big Band in a critically acclaimed show that clocked up over 1,000 West End performances on its West End premiere. Frequently imitated but never bettered, The Rat Pack – Live from Las Vegas features hit after hit, including Pack favourites The Lady is a Tramp, Mr Bojangles, That’s Amore, I’ve Got You Under My Skin, What Kind of Fool Am I?, Volare, My Way, Candyman, Everybody Loves Somebody and many, many more. If you wish you’d swung with the hardest partying pack in town, now’s your chance!

Now for 2018 with a special guest…
Director and Choreographer Mitch Sebastian said: “We are thrilled to introduce Ella Fitzgerald to the show for 2018 in both the West End and later UK tour dates, to celebrate the centenary of this great singers birth. The recipient of 13 Grammy Awards and the Grammy Lifetime Achievement Award, Ella was an artist Frank respected – ‘the best way to start any musical evening is with this girl. It don’t get better than this’, he says on one recording. The warmth of their friendship really shines through on the many Youtube videos of their amazing performances together. They duetted live and in several TV specials including ‘The Frank Sinatra Show’ to a global audience of millions. It was the series of highly successful – and lucrative – concerts in 1974 at Caesars Palace, Las Vegas, and later for two weeks on Broadway headlining Ella, Frank and Count Basie, that are cited as an important incentive to bring Frank out of self-imposed retirement.”