Sometimes, things just work. The right combination of people, the right places, the right ingredients or, in this case, the right voices. Two huge talents who can more than hold their own have come together again following on from the hugely successful 2016 Christmas number one album “Together” and tonight they were giving us a sneak preview of their upcoming release “Together Again” which hits stores on Friday.

In the intimate setting of the Groucho Club in Soho, Ball and Boe chatted through the history of their partnership, dating back to “Kismet” in 2007 (a production that has been described as a “bloody shambles”. Ball told us about the lack of direction, lack of choreographer and terrifying planned opening (with Boe entering in combat fatigues surrounded by corpses) designed to remind the audience that the production was set in Baghdad at a time when war in the Middle East was a current event. Ball then enlisted the talents of Boe to sing with him at his first Proms event and the two became friends. Ultimately this friendship culminated in the platinum-selling album in 2016, tours and the arrival, tonight, of the second collaborative album.

We were treated to stories of their tour of Australia (Ball – “It’s big down there”, Boe – “No, I’ve seen it”), on stage antics (including Ball’s offstage moonies that filled the wings, blocked out the light and caused Boe to speed up his songs just to get off stage), Boe’s need to have gravy with every meal and their love for live music and live theatre. Between the “chat” we heard three duets from the new album accompanied by piano. “As If We Never Said Goodbye” from Sunset Boulevard gave us a pleasing opening for the bigger numbers that followed. “The Rose” was a powerful and emotional performance from both. The biggest surprise came with “You’re The Voice” with some utterly stunning harmonies and Boe’s trademark top register vocals perfectly complementing Ball’s rich tone.

So, what about the “product” that they are promoting? Well, first off there is the impending Arena Tour that is covering most of the UK through November and December – and if you don’t have tickets yet, my advice is to go and get them if the vocal performance tonight was anything to go by! This Sunday sees a TV special at 9:00pm on ITV with guest appearances from Jason Manford and Imelda May. And then there is the album…

“Together Again” is a collection of songs from the musicals along with some unexpected surprises. The album comes in two formats – the Deluxe Edition providing a couple of extra tracks from ‘Hamilton’ and ‘Anastasia’. The Standard Edition boasts 14 songs including the three that were previewed tonight. In recognition of the 60th anniversary of ‘West Side Story’, the album opens with a medley of some of the immediately recognisable songs from the show – scored for a full orchestra. Other treats include “He Lives In You” from ‘The Lion King’, again with a full orchestral accompaniment and choir – this was a haunting piece of music anyway, but with these vocals on top it is taken to a new level altogether. Somewhat surprisingly you stumble into Morecambe and Wise’s “Bring Me Sunshine” – but a stripped back jazz/swing version! It shouldn’t work, but bizarrely it does. A personal favourite is “Not While I’m Around” from ‘Sweeney Todd’ – and, following his performance as Sweeney in 2012, I took the opportunity to get some insight from Mr. Ball in readiness for directing the show next year – thank you, sir! The album closes with two classics, “New York, New York” and “White Christmas” (featuring Bing Crosby) which are everything you would expect – and well-timed for a pre-Christmas release.

I have no doubt that we shall see “Together Again” reaching the same heights as “Together” did last year – and this will be wholly deserved. There is a risk that a third album might follow – tentatively titled “Oh Not Again”… and I for one won’t be disappointed when it comes. The evening and the album showcase two truly exceptional talents – and I am absolutely certain that the tour will do the same.

The relationship between Ball and Boe began 10 years ago after performing in Kismet at the London Coliseum. It was then that Michael Ball made history as the first musical theatre star to be given a solo concert at the BBC Proms, and asked Alfie Boe to join him. Their instant camaraderie and professional mutual admiration made for the perfect pairing and, to the delight of their hundreds of thousands of fans across the globe, came to fruition when Decca Records released ‘Together’.

The album’s double-platinum success is a testament to the popularity and talent of the UK’s finest voices and the momentum shows no sign of slowing with the release of ‘Together Again’.

Together Again Track List:
West Side Story Medley
As If We Never Said Goodbye
The Prayer
He Lives In You
Evermore
The Rose
Bring Me Sunshine
Some Enchanted Evening
Hero
Not While I’m Around
Stranger In Paradise / This Is My Beloved
You’re The Voice
New York, New York
White Christmas with Bing Crosby

DELUXE ONLY
You’ll Be Back
Once Upon A December 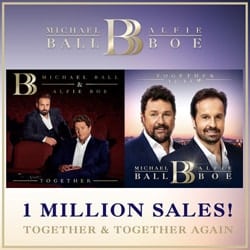 NEWS UPDATE
Michael Ball and Alfie Boe have reached a combined sales of over 1 million sales of their albums ‘Together’ and ‘Together Again’.

Together Again (out Oct 2017) is holding strong as no.6 after 8 weeks in the chart and was also in top 10 best-selling albums of last year.

Cirque du Soleil has announced the London run for one of its most critically acclaimed touring show KURIOS— Cabinet of Curiosities. Opening on 13th … END_OF_DOCUMENT_TOKEN_TO_BE_REPLACED

Ambassador Theatre Group Productions are delighted to announce a UK and Ireland Tour of the pantomime MOTHER GOOSE. The first of its kind to tour the … END_OF_DOCUMENT_TOKEN_TO_BE_REPLACED

The National Theatre’s new musical Hex returns to the Olivier theatre for Christmas, after its original 2021 opening was delayed due to covid. The … END_OF_DOCUMENT_TOKEN_TO_BE_REPLACED