This morning (18th February 2020), we were invited to a breakfast launch for the return of Hairspray the musical, to London for 2020. Hosted by the one and only Michael Ball, and what a popular event it was, with barely a spare seat in the Boulevard Theatre.

Producer Adam Spiegel introduced this special event saying he has waited 10 years for Michael Ball to be free again so they could bring back Hairspray – as for him Michael was the only one who he wanted to play Edna Turnblad.

Michael then came on and took over the hosting duties joking he knew he would play Edna again and he even kept the costumes.

Michael Ball was then joined on stage by cast members Lizzie Bea (Tracy Turnblad) who performed Good Morning Baltimore, Paul Merton (Wilbur Turnblad), who categorically stated he cannot dance but he has been told he only has to walk to the music so should be ok. Rita Simons (Velma von Tussle) who told us why she still thinks the themes of racism are still so relevant and Marisha Wallace (Motormouth Maybelle) who I can only describe as bringing down the house when she sang “I know where I’ve been”.

The staged part of the event ended after that and everyone was invited to share breakfast champers and bagels in the bar, and while guests tucked into that, a few of us sat down with a couple of the cast for a bit of a chat.
Paul assured us, although he is known for adlibbing and improvisation he would be following the script this time – unless something went really wrong on stage!

Lizzie & the cast also talked about how awesome their costumes are. Lizzie cannot wait to get the iconic look of Tracy Turnblad. The cast are yet to start rehearsals but are excited – saying that’s where the hard work really is.

The backstage actions are just as important as on-stage action to make sure everyone can get where they need to be. Rita told us she is ready to play the character as she is used to playing the bad guy now and had actually just found out that she has been nominated for the 3rd year in a row as the ‘best panto villain’. All the cast cannot wait to make the characters their own and bring them to life and the excitement and dedication was very obvious when talking with them. 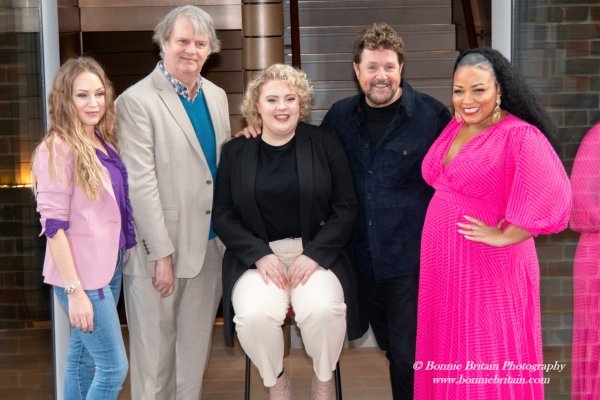 I am really looking forward to seeing this production in all its glory at the beautiful ENO London Coliseum, previews start April 23rd and it will run until August 30th including Sunday shows which they hope will make the show more accessible for families.

Hairspray the Musical is back and starring the West End’s hottest couple! Don’t miss Michael Ball reprising his Olivier Award-winning role as Edna Turnblad alongside star of Have I Got News For You, Paul Merton, as husband Wilbur. The huge-hearted, smash-hit musical arrives at the magnificent London Coliseum from 23 April for a strictly limited 18-week season.

Baltimore, 1962. Tracy Turnblad is a big girl with big hair and big dreams. Can she make it on the local TV dance show, win the heart of teen heartthrob Link Larkin and bring everyone together – whatever their colour, size or hairdo? Well if you want a change, you’ve really got to shake things up!

From the original award-winning creative team of director Jack O’Brien and choreographer Jerry Mitchell, and featuring the infectiously feel-good songs Good Morning Baltimore, You Can’t Stop the Beat and Big, Blonde and Beautiful this inspirational, fun-loving and fabulously uplifting musical sensation is back and bigger than ever.

It’s the show that gives maximum lift… but for 18 weeks only. Don’t miss out – book now!

Lead producer Colin Ingram, together with Robert Zemeckis and Bob Gale, the creators of the Back To The Future film trilogy, are delighted to announce … END_OF_DOCUMENT_TOKEN_TO_BE_REPLACED

Due to popular demand, Vardy v Rooney: The Wagatha Christie Trial will play for a strictly limited run at the Ambassadors Theatre in the West End, … END_OF_DOCUMENT_TOKEN_TO_BE_REPLACED

21 years after it first exploded into the West End, Queen and Ben Elton’s sensational smash hit show ‘We Will Rock You’ returns to London next year … END_OF_DOCUMENT_TOKEN_TO_BE_REPLACED

'Look anyone will tell you, I’m a pretty straight sort of guy.' Tony Blair A reckless reappraisal of the life of former Ugly Rumours front man and … END_OF_DOCUMENT_TOKEN_TO_BE_REPLACED