Global Creatures, the producer of Moulin Rouge! The Musical, has announced that the UK premiere of the acclaimed show will begin performances at the Piccadilly Theatre in London on Friday 12 November 2021, with Press Night on Wednesday 8 December 2021 (at 7:00pm). 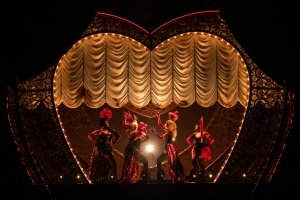 “At its heart, Moulin Rouge! The Musical is about a group of artists fighting to keep their stage show alive. That element of the story has felt very real for us as a company, as we’ve contended with the Covid shutdown and delay to our UK premiere. But now we are so excited and so honoured to finally confirm that our show will form part of a revitalised West End. We cannot wait for the red windmill to start turning in London!” said producer and CEO of Global Creatures, Carmen Pavlovic.

Through the pandemic, the production process has progressed wherever possible, including holding auditions for the UK cast.

Alex said: “The last 12 months have proven uniquely challenging in engaging with performers as we look to cast the UK production. Nevertheless we have all been astounded by the perseverance and sheer talent of those we have seen, and I am excited to see the cast coming together.

It feels great to finally be confirming our UK premiere dates. I am thrilled now that we can look forward to bringing Moulin Rouge! to life in London and to welcome our audiences”.

Moulin Rouge! The Musical is produced by Carmen Pavlovic and Gerry Ryan OAM for Global Creatures and Bill Damaschke. The Executive Producer in the West End is Patrick Murphy and General Management in the West End is by Playful Productions.

The musical, which features a lavish, immersive set, follows aspiring writer Christian and dancer Satine as they fall in love. But pressure mounts on Satine as her boss, Moulin Rouge owner Harold Zidler, relies on her to appease the Duke of Monroth, whose money will keep the establishment running.

Baz Luhrmann’s iconic film comes to life onstage, remixed for today in a new musical mash-up extravaganza. Moulin Rouge! The Musical invites you to enter a world of passionate romance and eye-popping splendour… a place where Bohemians and aristocrats revel together in electrifying enchantment… a place where all your wildest dreams come true!

Bringing Moulin Rouge! The Musical to the stage was a decade-long journey, spanning 3 continents, encompassing 75 songs credited to 165 songwriters, administered by 31 publishers, representing over 160 years of music, including recent hits released since the movie premiered 20 years ago.

The Moulin Rouge! The Musical original Broadway Cast Album, which debuted at No.1 on Billboard’s Cast Albums Chart, is available at all digital and streaming providers by Baz Luhrmann’s label, House of Iona, and RCA Records. Click here to listen to the album.

Prior to the pandemic, Moulin Rouge! The Musical had been performing on Broadway at the Al Hirschfeld Theatre where it opened to widespread critical acclaim on 25 July 2019. Productions have also been announced for Australia, Japan and a North American Tour.

A theatrical celebration of truth, beauty, freedom and — above all — love, this is more than a musical… it is a state of mind. Welcome to the Moulin Rouge!

Should the timeline of the Government’s Road Map change, or be delayed for any reason, the schedule will be adjusted as necessary to ensure that all performances can continue safely under the conditions of Step 4 of the Road Map. Moulin Rouge! The Musical continues to call for a government-backed insurance scheme to properly support the re-opening of the theatre industry.

CAST
Cast to be announced

The global smash hit musical MAMMA MIA! will return to London’s West End at the Novello Theatre on 25 August 2021. Now in its 23rd year in London, … END_OF_DOCUMENT_TOKEN_TO_BE_REPLACED

Greetings, salutations and welcome to the West End 2021 class of Westerberg High. Leading the cast in the highly celebrated return of Heathers the … END_OF_DOCUMENT_TOKEN_TO_BE_REPLACED

THE PRINCE OF EGYPT, the hit musical based on the classic DreamWorks Animation film, is proud to confirm the complete cast, orchestra and company of … END_OF_DOCUMENT_TOKEN_TO_BE_REPLACED