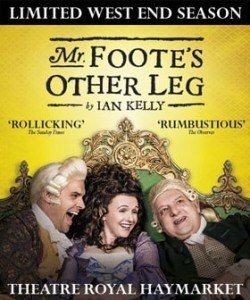 Tonight is the press night for Mr Foote’s Other Leg in London’s West End.

The new comedy play by Ian Kelly transferred into the West End last month for a limited 12-week season at the Theatre Royal Haymarket from 28th October 2015 to 23rd January 2016. It opens tonight, Wednesday 4th November 2015, after a short preview period that has already been garnering a positive response from audiences.

In Georgian London, no one is more famous than Samuel Foote. Satirist, impressionist and dangerous comedian, he has become a celebrity in a city, and at the moment in time, when the concept of selling personality was born. He even has the ear of the king.

Adored by many, despised by some, Foote finds himself at the sharp end of attacks from the press… and a surgeon’s knife. And in an age obsessed with fame, his colleagues from the worlds of science and the stage – from Benjamin Franklin to David Garrick – begin to wonder: does fame make you mad?

Mr Foote’s Other Leg, an outrageous tale of Comedy, Tragedy & Fame, is a stage adaption of the 2012 biography of 18th century actor Samuel Foote, both of which were written by Ian Kelly. It made its world premiere at the Hampstead Theatre in September of this year. The original 4-week run was a sell-out success, and it was announced shortly after that the critically acclaimed production would transfer into the West End for 12 weeks only, taking over from McQueen at the Theatre Royal Haymarket.

Mr Foote’s Other Leg is produced in the West End by Michael Codron, Anthony Pye-Jeary, Greg Ripley-Duggan for Hampstead Theatre Productions and James L. Nederlander. It is directed by Richard Eyre with design by Tim Hatley, sound by John Leonard and compositions by Richard Hartley.

Simon Russell Beale is an acclaimed actor who has won two BAFTAs, three Olivier Awards, and Evening Standard and Critics Circle Awards for his work. His stage credits include Temple (Donmar – for which he was recently nominated for a Best Actor award in the 61st Evening Standard Theatre Awards), King Lear and Timon of Athens (National Theatre) and Privates on Parade (Noel Coward Theatre). TV and film credits include Penny Dreadful, Henry IV Parts I & II, Spooks, My Week With Marilyn, Tarzan, Into The Woods and The Deep Blue Sea.

Dervla Kirwan is an award-winning actress best known for her TV roles in Goodnight Sweetheart and Ballykissangel, and has also appeared on screen in The Fuse, The Silence, Material Girl, Moving On and Doctor Who, and her film credits include Silent Hours, Entity and Ondine. Her stage credits include The Weir (Donmar), Uncle Vanya (Chichester) and Aristocrats (National).

Joseph Millson is a stage and screen actor who originated the role of Raoul in Andrew Lloyd Webber’s Phantom sequel, Love Never Dies. His other stage credits include the title role in Macbeth (Globe) and Rocket To The Moon (National). His TV and film credits include Peak Practice, Penny Dreadful, Holby City, Campus, The Chameleon, I Give It A Year and Casino Royale.

Mr Foote’s Other Leg opens at the Theatre Royal Haymarket tonight, Wednesday 4th November 2015, following previews from 28th October 2015. It runs in the West End for 12 weeks only and the final performance will take place on 23rd January 2016.