I knew it would happen, and I avoided it by deliberately turning up so late to Musical Con that I missed the entire opening ceremony: there were delays in getting into the venue proper, and a substantial number of paying customers had missed the start of proceedings. There were other workshops and masterclasses that started at 10:00am, which some people were late for, through no fault of their own. What’s worse is that it need not have happened – all the organisers needed to do was open the doors earlier than they did. By the time I went in, shortly after 12 noon, entry couldn’t have been more civilised. 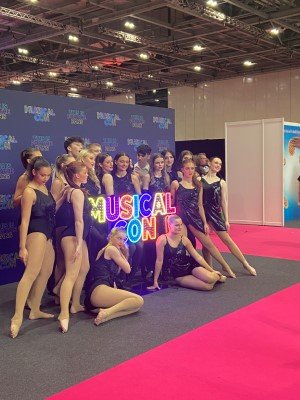 Some of the merchandise stalls were very closely bunched together, in a section called ‘Marketplace’, which led to overcrowding and bottlenecks. A large number of drama schools, colleges and conservatoires were present, promoting their courses. “This is for the fans,” so the convention’s own signage asserted, something which they took to heart, with a good number of them dressed in ‘cosplay’, that is, dressed as a favourite character from a favourite show. Others wore tops bearing the logo of a favourite production – Moulin Rouge! and Bonnie & Clyde seemed particularly popular. A ‘fan zone’ was the proper place for like-minded superfans of particular shows to meet, with a published timetable available, though it wasn’t necessary to stick rigidly to it, and people continued to meet informally throughout the day.

The convention’s own stand was very busy, with long queues to purchase tote bags, T-shirts, hoodies and posters (no coffee mugs as far as I could see, so I wasn’t inclined to line up). It was entirely possible to spend as much or as little as one wished here – with a magazine about musicals called (wait for it) Musicals Magazine available to buy at a discounted price, and stickers and notepads, amongst other things, from ‘Letters to July’, which trades on Etsy, as do Lee Greenaway and Peter Hannah, selling drawings of portraits and theatre frontages respectively.

I went to the Backstage Theatre – unlike the Main Stage, it had seats – although it felt like listening to two shows in one go, and not because people in the row behind were talking at full conversational volume. There were headphones which we had to put on in order to hear what was being said, but the sheer volume from the Main Stage meant the microphones in the Backstage Theatre were picking up sound from both stages at once. Still, listening to Kayla Lomas-Kirton, the resident choreographer at Cabaret at the Kit Kat Club, Tom Jackson Greaves, who recently choreographed a stage adaptation of The Book Thief at the Octagon Theatre in Bolton, and before that a production at the Watermill Theatre in Berkshire of Whistle Down The Wind, and Gary Lloyd, choreographer and associate director of Heathers the Musical, currently at The Other Palace, was an insightful experience, with some excellent answers to questions from the audience about, for instance, the different collaborative processes involved in being a director/choreographer as opposed to purely choreographing a show.

I heard much of the ‘Star of Musical Con’ competition final while this was going on – there was a knowing acknowledgement amongst those of us next door when someone started singing ‘Waving Through A Window’ from Dear Evan Hansen, as the London production was performing its final shows on the same day. The winner was Joshua Ashton Williams, a co-founder of Williams Creatives, a Leicestershire-based company that aims to demonstrate “passion and creativity through theatre”, putting on productions and events on a regular basis. His choice of song was ‘I’m Here’ from The Color Purple.

I was also introduced to Footballers’ Wives The Musical, which has a cast recording ready to go, released on 25 November 2022, by way of a panel discussion led by Alice Fearn, who plays Tanya Turner, who was joined by Simon Bailey, who plays Jason, the captain of Earls Park Football Club, plus the composer and lyricist, Kath Gotts, and the cast recording’s producers, Joe and Nikki Davison of Auburn Jam Music. Whether one is interested in a storyline set in 2002, “when Premier League Football was the new Rock ‘n’ Roll – with the money, the glamour and the bad behaviour to match” was almost secondary. I found the creative processes being described to be fascinating, whether it was the use of various techniques not only in writing songs but coming up with the instrumental arrangements, or remembering to secure the appropriate rights to a musical adaptation in the first place, something the creative juices behind The Unofficial Bridgerton Musical didn’t do for whatever reason.

Participants in dance classes seemed to be satisfied with their experiences. But I wouldn’t have forked out for photo and autograph opportunities (indeed, I didn’t) – it seems to be the sort of thing one could do at the stage door after a show free of charge. Overall, my own experience was more interesting and worthwhile than I had expected, and quite refreshingly for an event involving so many people peddling their wares, I never felt pressurised to buy anything I really didn’t want.

After creating the “absorbing and provocative” Version 2.0 and the “eminently lovable” Letters, Kashyap Raja returns to London with his new play Earth … END_OF_DOCUMENT_TOKEN_TO_BE_REPLACED