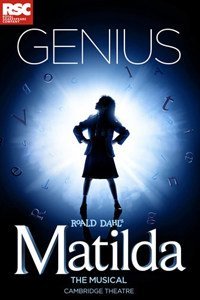 The Royal Shakespeare Company’s Matilda The Musical has announced new casting with Hayden Tee playing Miss Trunchbull alongside Rob Compton and Holly Dale Spencer as Mr and Mrs Wormwood. Gina Beck will continue to play Miss Honey, having joined the company in September 2017. Isobel Hubble and Francesca McKeown will join Sarah Munday and Olivia Wells in sharing the title role of Matilda. The multi-award-winning production is currently playing its seventh year in the West End and is booking until 20 October 2019.

To mark the arrival of the new adult and child cast members, the RSC has created a brand new video which sees the four Matildas run away and join Giffords Circus for the day where they were taught special skills including acrobatics, clowning and juggling.

Gina Beck (Miss Honey) is renowned for leading roles in musical theatre. Previous roles have included Glinda in Wicked (Apollo Victoria Theatre & US Tour), Christine Daaé in The Phantom of the Opera (Her Majesty’s Theatre), Magnolia Hawks in Daniel Evan’s production of Show Boat (New London Theatre) and Cosette in Les Misérables (Queen’s Theatre). A graduate of the Royal Central School of Speech and Drama, her other theatre credits include Far From the Madding Crowd (The Watermill Theatre) and The Belle’s Stratagem (Southwark Playhouse) both directed by Jessica Swale, I Love You You’re Perfect Now Change (Arts Theatre Upstairs), Jacques Brel is Alive and Well and Living in Paris (Charing Cross Theatre), The Sound of Music (Kuala Lumpur), Peter Pan (Birmingham Rep), The Kissing Dance (Jermyn Street Theatre) and Imagine This (Plymouth Theatre Royal). Her television credits include the BBC’s Doctors and Sherlock Holmes and The Case of the Silk Stocking. Opera credits include Madame Butterfly and L’elisir d’amore (Opera Holland Park). She was a soloist in the 21st and 25th-anniversary celebrations of Les Misérables as well as in the recent blockbuster film version. She made her BBC Proms debut in 2016 as a soloist in the BBC’s Bernstein prom.

Hayden Tee (Miss Trunchbull) is an award-winning musical theatre actor from New Zealand. Previous roles have included Javert in Les Miserables (Broadway, West End and International Tour), Joe Cable in South Pacific (Adelaide Festival Centre and Australian National Tour), Prof Bhaer in Little Women (Australian National Music Theatre), and Thomas Andrews in Titanic (Theatre Royal, Sydney). Having trained at the National Institute of Dramatic Arts, Australia, his other theatre credits include Three Winters Green (Stables Theatre, New South Wales), Kiwi Fruits 2 (The Court Theatre, Christchurch), Only Heaven Knows (The Hayes Theatre), Songs for a New World (Australian National Music Theatre), I Love you, You’re Perfect, Now Change (Australian National Music Theatre), My Fair Lady (Opera Australia), Cats (International Tour), Jekyll and Hyde (South Korea, Taiwan), Into the Woods (Alliance Theatre, Atlanta), and Camelot (Pittsburgh Public Theatre). He is the recipient of the Gluggs Theatre Award for Best Supporting Actor, and the Gluggs Theatre Award for Best Cabaret Performance of the Year. Hayden’s debut solo cabaret show Me to a Tee was performed to great acclaim in Sydney, Auckland and New York. Other cabaret shows include Quarterlife Crisis (Sydney), Hayden Tee (Sydney, Melbourne and New York) and Muftee which was a nightly cabaret and chat show which opened at the Stables Theatre, Sydney, in 2003 and ran for a record breaking seven months. His show The Gin is Cold…But the Piano Is Hot, which focused on the music of Kander and Ebb, also toured Australia.

Matilda The Musical is written by Dennis Kelly, with music and lyrics by Tim Minchin, and direction by Matthew Warchus.

Matilda The Musical has now been seen by 8 million people worldwide, having toured to over 65 cities and played more than 6000 performances in the West End, on Broadway and on tour across North America, the UK, Ireland, Australia and New Zealand. Matilda The Musical will have its first non-English language production at the LG Arts Centre in Seoul, South Korea from September 2018.

The North America production toured 52 cities. The Australian and New Zealand production won a Sydney Theatre Award for Best Musical in 2015, and played sold-out seasons in Melbourne, Brisbane, Perth, Adelaide and Auckland. The show broke further records in July 2016 by winning all 13 Helpmann Awards for which it was nominated.

The production is designed by Rob Howell, with choreography by Peter Darling, orchestrations, additional music and musical supervision by Christopher Nightingale, lighting by Hugh Vanstone, sound by Simon Baker and the special effects and illusions are by Paul Kieve.

A packed line-up of 34 hit West End shows has been unveiled so far ahead of this year’s West End LIVE, a free and unticketed celebration of London’s … END_OF_DOCUMENT_TOKEN_TO_BE_REPLACED

Based on the true story behind the escape from the infamous Stalag Luft III prisoner of war camp, Tom, Dick and Harry (the names of the three tunnels … END_OF_DOCUMENT_TOKEN_TO_BE_REPLACED