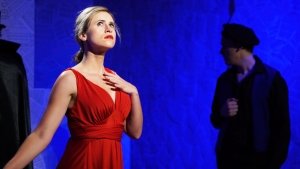 In defiance of the decimation of the musical theatre industry in Australia and around the world, City Theatre will create a brand new, fully staged short musical from idea to performance in just one week.

The finished work will be performed to a live audience at the Flight Path Theatre and streamed online at CityTheatre.com.au on Saturday the 8th of August at 7:30pm AEST, or 10:30am London time.

This is a free livestream experience featuring talent from leading Australian theatre schools and theatres, including WAAPA, Belvoir Street Theatre and Enmore Theatre.

The production features an all female creative team, featuring Sarah Campbell (Book), Renae Goodman (Music), Emma Young (Music/Lyrics) and Jo Elizabeth Finnis (Direction). With just 44% of Australian Theatre productions featuring a female playwright*, and less so for musicals, City Theatre sees this as an excellent opportunity to continue the diversification of ideas and representation within the arts community.

The public decided the theme of the musical, ‘Kaleidoscope’, with City Theatre holding a live poll on their Facebook page which enabled the Sydney theatre community to vote on what they would like to challenge the creative team with.

The creative team has 7 days to devise, write, compose, cast, rehearse, stage and perform an entirely new work from ideation to curtain call. In this time, the broader team works to create all the costumes, props, set, lighting and sound design you would expect from a traditional production.

Project Interlude features creatives from the 2020 production of Jasper in Deadland, which was just 2 weeks away from opening night when NSW went into lockdown after a 3 month rehearsal period. This is an opportunity to take to the Flight Path Theatre Stage with a new work designed to breathe life into the theatre scene and inspire the creation of new, Australian work.

Flight Path Theatre fell victim to the global pandemic just 9 months after opening, announcing that it was closing its doors in May 2020. As one of the only independent theatre spaces left in Sydney, this loss caused public outcry within the theatre community, which has led to public support and a longer runway for the theatre.

Project Interlude will be the first musical in the space since the inception of the pandemic, helping prolong the life of this invaluable space and helping to keep open the doors on the breeding ground of Sydney’s future talent.

Jo Elizabeth Finnis, Director of Project Interlude said ‘This project is helping our team find some light in these unprecedented times. I am excited to explore a new world that I cannot learn about yet, to help find these characters with actors we haven’t cast yet, and to watch this piece of theatre come to life from the pages that aren’t even written yet! Most importantly, I am excited to share this experience with an extremely talented group of creatives who are all ready to focus on what we love doing again.’

Daniel Hill, City Theatre’s Producer said ‘This is a fantastic opportunity to breathe new life into the roots of Australian theatre which has struggled significantly in 2020. Independent theatre is the breeding ground of the global talent Australia produces. Ensuring this continues, even through these difficult times, is vital to the continued growth of a rich entertainment industry in the coming years as fresh talent develops new skills and tests the ideas of the future.’

This project has already seen some local press, including appearances in Broadway World, The Daily Telegraph and Critical Stage Touring plus interviews with Reviews by Judith and appearances on the podcast From Inspiration to Stage.

Previous work by City Theatre includes the Musical of Musicals: The Musical! (Absolute Theatre, Reviews by Judith) and the postponed Jasper in Deadland.