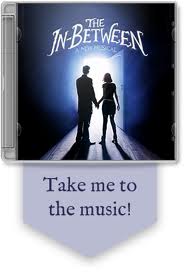 I love a new musical. Imagination is one of our greatest virtues as human beings and there are so many stories to be told. There are a number of new musicals I’ve thrown my support behind such as After The Turn, Stand Tall and, of course, My Land’s Shore. The potential they possess excites me immensely and I have utmost faith in their ability to further enrich British theatre. The discovery of another promising new musical is always something that puts a smile on my face – which is exactly what The In-Between has done.

The reason that people love theatre is that it transports them to another world. For those few hours, they can lose themselves in a fantasy and escape from whatever problems they may be experiencing in their life. The In-Between especially will do this for an audience because fantasy and escape is exactly what it is all about. The story centres around nineteen year-old Flick Wimple who is drifting through life, living in the shadow of older sister Alice who has cared for her since the death of their parents in a car accident. Everything changes when, one day, she finds herself trapped in The In-Between, a space between parallel worlds. Guided by the mysterious Calicus, she is offered the chance to leave her problems behind, but everything is not as it seems and soon Flick faces a life-changing choice.

The In-Between is a musical about ‘love, friendship and letting go, with both humour and heart’ from Laura Tisdall. This marks her second trip down Writer’s Lane, with her first musical Faerytale being showcased by the Guildford School of Acting (GSA) at the Electric Theatre in 2009. Since she graduated from the University of Sussex (with a First Class BMus Hons in Music), Tisdall has been making a name for herself in the world of musical theatre, composing the music for the UK tour of Hugh Woodridge/Bill Kenwright’s The Haunting, arranging and orchestrating the Cantabile Christmas Cracker and contributing as Musical Associate on The Night of 1000 Voices, Kerry Ellis/Brian May’s Anthems concert and The Wonderful World of Captain Beaky.

Now, Tisdall’s attention is being focused on The In-Between, having just recorded a seven-track concept album of the musical. Some superb West End names have been recruited to provide vocals: Dianne Pilkington, Cassandra Compton, Sabrina Aloueche, Daniel Boys, Julie Atherton, Hadley Fraser, Lauren Samuels, Alexia Khadime and Liam Tamne. A majority of the songs have an upbeat, edgy pop-vibe to them, with catchy melodies and some great lyrics. There are a couple of noteworthy duets on there, such as Pilkington and Compton’s sisterly love/hate pairing and the growing bond of Flick and Calicus by Les Miserables cast mates Khadime and Tamne. I was particularly drawn in though by the song, ‘Beyond The Door’, a darkly dramatic number which features a strong, passionate delivery by Fraser.

From what I’ve seen/heard of The In-Between so far, I have high hopes for its future chances of success. It has a refreshingly original story (that hasn’t come from a popular hit film) and some really compelling songs to bolster it and I, for one, would certainly like to see more of this show.