Fourth Wall Live have announced the world premiere of a new online version of the cult West End Musical EUROBEAT – The Pride of Europe. This irreverent, hilarious homage and celebration of the world’s best-loved song contest will be filmed at The Clapham Grand and streamed globally from 30 April – 10 May 2021 on Stream.Theatre. Viewers will be asked to vote online after watching the show (Your vote really counts!) and The Results Show will be streamed from 14 – 18 May 2021. www.eurobeatpride.com 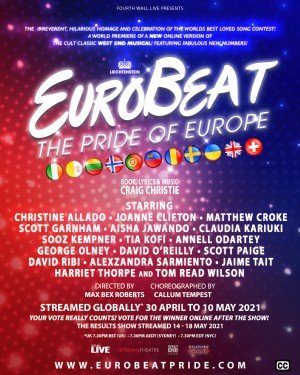 Now featuring additional new songs and material EUROBEAT – The Pride of Europe has been delighting audiences since its 2008 West End run, this is the latest iteration to join the Eurobeat canon, which (much like its real-life counterpart) is continuously evolving, adapting and reflecting current times. After Moldova and Bosnia & Herzegovina, it is now Liechtenstein’s turn to crown this year’s Eurobeat champion. Take a trip to this tiny Alpine nation for some hilarious new songs, and some old favourites.

This loving send-up is bound to delight any fan of Europe’s largest television event! A live stream of power ballads galore, outrageous dance routines, key-changes, drag queens, a sprinkle of politics and the drama of crowning a winner! Eurobeat: The Pride of Europe is a celebration of an ever more diverse continent that sure loves to party. A song contest which reflects quirky, colourful and camp Europe, where even the smallest can come out and make it big!

EUROBEAT – The Pride of Europe has a book, music and lyrics by Craig Christie, is directed by Max Bex Roberts, choreographed by Callum Tempest and the musical supervisor is Adrian Kirk.

Following the UK Government shutdown of theatres in March 2020, the producers of THE ADDAMS FAMILY, A Musical Comedy, have rescheduled the new UK … END_OF_DOCUMENT_TOKEN_TO_BE_REPLACED

Disney’s Olivier Award-winning stage musical Beauty and the Beast today announces the cast to star in the re-imagined and re-designed new production. … END_OF_DOCUMENT_TOKEN_TO_BE_REPLACED