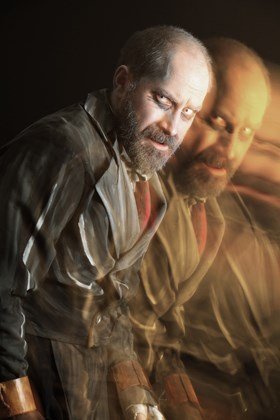 Hailed as “a forcefully compelling masterpiece” (The Manx Independent) and the “definitive telling of A Christmas Carol” (Redditch Standard), the production has been rated as one of “the top Christmas Shows in London, Edinburgh and around the UK” (High 50 Culture), winning Best Performer in Theatre (Fringe Report Awards 2012) and a nomination for The London Theatre Award (London Awards for Art and Performance 2012), as well as Official Recognition from Her Majesty Queen Elizabeth II at Buckingham Palace.

A box office hit, its success is paralleled by Brother Wolf’s other ground-breaking shows: Fagin’s Last Hour, “truly astonishing… unforgettable theatre at its best” (The Courier), Strange Case of Dr Jekyll and Mr Hyde, “magnificently intense, riveting theatre from one man” (The York Press), winner of Best Male Act (Solo Fest 2013), and A Lesson from Auschwitz, “it’s important that plays like this are seen by as many people as possible” (London Theatre 1).

Jacob Marley is dead and condemned to an eternity of carrying a heavy chain, forged in life; a life to which he can no longer return except to recount the tale of his miserly business partner, Ebenezer Scrooge, and the path that lead to his redemption. Through Marley’s words, we learn how three magical spirits opened Scrooge’s eyes and made him realise the true value of love and forgiveness.

Andrew Lloyd Webber’s The Phantom of the Opera has returned to its home, Her Majesty’s Theatre London. Experience the thrill of the West End’s most … END_OF_DOCUMENT_TOKEN_TO_BE_REPLACED

The full cast is announced today for the 40th Anniversary tour of Michael Frayn’s multi-award-winning farce, Noises Off, which will open at Theatre … END_OF_DOCUMENT_TOKEN_TO_BE_REPLACED

Adapted from Susan Hill’s classic book, The Woman in Black at the Fortune Theatre has been thrilling London audiences since 1989. In The Woman … END_OF_DOCUMENT_TOKEN_TO_BE_REPLACED

The producers of the multi-award-winning, critically acclaimed production of CABARET at the KIT KAT CLUB in London’s West End are thrilled to announce … END_OF_DOCUMENT_TOKEN_TO_BE_REPLACED