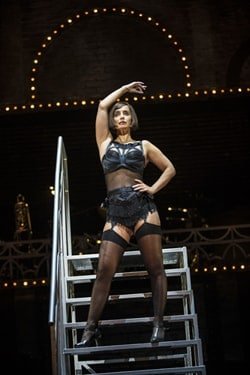 Rufus Norris’ CABARET starring WILL YOUNG, who reprises his award-winning performance as the Emcee, and LOUISE REDKNAPP, making her stage debut as Sally Bowles, is breaking records at the box office as the production begins its UK tour.

Playing to packed houses at the New Wimbledon Theatre where the production opened on 21 September and broke box office records for a 12-show run, CABARET is proving a hit with audiences across the country as sales of the landmark musical are exceeding expectations. At Theatre Royal in Brighton, CABARET is officially the highest grossing single week-long musical in the theatre’s history, and at Malvern Theatre, the show’s sales have smashed records as the highest grossing single week-long musical or play.

CABARET features show-stopping choreography, dazzling costumes and some of the most iconic songs in musical theatre including ‘Money Makes The World Go Round’, ‘Two Ladies’ ‘Maybe This Time’ and of course ‘Cabaret’. The production turns Weimar Berlin of 1931 into a sassy, sizzling haven of decadence, and at its dark heart is the legendary and notorious Emcee, who performs nightly at the infamous Kit Kat Klub.

Since its Broadway premiere in 1966 and the famous movie version with Liza Minnelli and Oscar winner Joel Grey, CABARET has won a staggering number of stage and screen awards including 8 Oscars, 7 BAFTAs and 13 Tonys. Norris’ production has enjoyed two smash hit West End runs and has picked up 2 Olivier Awards.

Internationally renowned singer/songwriter, WILL YOUNG, reprises his Olivier Award-nominated performance as the enigmatic Emcee. Ever since winning the inaugural series of Pop Idol in 2001, Will Young has been one of the UK’s most popular and successful music artists. He holds the record for the fastest selling debut single in British chart history, and has enjoyed a phenomenal career in music with four No1 albums, as well as acting alongside Dame Judi Dench in the film Mrs. Henderson Presents.

LOUISE REDKNAPP rose to fame as a member of the girl group Eternal. She left the band to carve out a successful solo career achieving an impressive twelve Top 20 singles, including the hits Naked and Stuck in the Middle and selling over 5 million records with 5 albums. Since then she has rarely left our television screens and most recently wowed the nation with her dancing skills finishing ‘runner up’ in the 2016 series of BBC1’s Strictly Come Dancing.

The cast also includes Susan Penhaligon as Fraulein Schneider. Best known from the popular television series Bouquet of Barbed Wire and the sitcom A Fine Romance with Judi Dench, Susan’s film appearances include Under Milk Wood, The Land That Time Forgot and Paul Verhoeven’s Soldier of Orange. Extensive stage credits across the UK include Dangerous Obsession, Mrs Warren’s Profession and The Constant Wife. West End credits include Three Sisters and The Real Thing.

Choreography is by Javier De Frutos who won the Olivier Award for his work on this original production of Cabaret. Named by the Evening Standard as one of 2016 most influential people, he’s one of only three artists in the history of the Olivier Awards to receive nominations in all dance categories. Other awards include an Evening Standard Award for The Most Incredible Thing in collaboration with Pet Shop Boys, Critics’ Circle Awards for Milagros with Royal New Zealand Ballet and Fiction for BalletBoyz named Best of Dance by The Arts Desk and Top 10 by the Guardian for 2016.

You may have seen this show before, but go again! This production has everything you loved about the original with a few added elements to keep it fresh and relevant. “Life is a Cabaret old chum, go see the Cabaret!”
Read our review of Cabaret

Further dates to be confirmed…