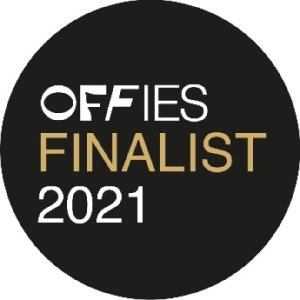 Exciting times for the OffWestEnd OFFIES who today announces the finalists for the 2020 OFFIES AWARDS.

The Offies recognise and celebrate the excellence, innovation and ingenuity of independent, fringe and alternative theatres across London, helping to raise their profiles and rewarding the new talent that they nurture, which is essential for the future of the theatre industry. Though theatre has been devastated by the Covid pandemic in 2020, there were enough high-quality live shows receiving Offies nominations before lockdown, and between lockdowns, to enable the judging panel to select 47 finalists across 16 of the 28 Offies categories. The winners will be announced at the Offies Awards Ceremony, being held online on 21st February 2021.

The finalists include plays Scrounger at the Finborough and The Sugar Syndrome at the Orange Tree Theatre; musicals Rags at the Park Theatre and The Last Five Years at Southwark Playhouse; and shows under the IDEA category which covers Innovative, Devised, Experiential & Atypical work. Amongst the individual finalists are Frances Barber for Musik at Leicester Square Theatre, and Sam Crane for The Rage of Narcissus at the Pleasance. Venues covered also include Battersea Arts Centre, The Old Red Lion, Roundhouse, Soho Theatre, Wiltons Music Hall and the new (outdoor) Garden Theatre at the Eagle.

Geoffrey Brown, OffWestEnd Director, said: “In spite of live theatre being closed for most of 2020, there were still some fantastic shows at the start of the year, and between lockdowns, and OffWestEnd is delighted that we are able to recognise and celebrate the best of this work.”

Next week, OffWestEnd will also announce the finalists for its new OnComm Awards for online shows – OffWestEnd’s new award introduced to respond to all the wonderful online shows that emerged during the Covid lockdown. We expect a further 40 OnComm finalists, across at least 10 categories.

The next Offies Awards event, where Offies and OnComm winners will be announced, along with some special awards, will be held online on 21st February and will be broadcast free to all from the Scenesaver platform.

More details will be released before the end of January.

The following categories are not going forward for 2021 awards as there were insufficient nominations due to theatre closures arising from Covid-19 lockdowns:

For more information about Off West End and the Offies Awards please visit:
https://offwestend.com/