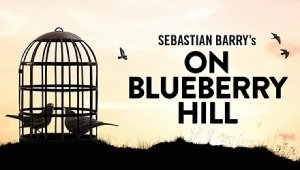 Olivier Award-winning and internationally-acclaimed Irish theatre company, Fishamble: The New Play Company, will be bringing its production of On Blueberry Hill to the West End in Spring 2020. Following hugely successful and sell-out seasons in Dublin and New York, Fishamble’s critically acclaimed production of Sebastian Barry’s new play opens at London’s Trafalgar Studios on 5 March (Press Night 11 March) for a strictly limited season until 2 May 2020.

On Blueberry Hill is Sebastian Barry’s first new play in 10 years. He is one of Ireland’s greatest living writers and the current Laureate of Irish Fiction. Born in Dublin in 1955 his novels and plays have won, among other awards, the Kerry Group Irish Fiction Prize, the Costa Book of the Year award, the Irish Book Awards Best Novel, the Independent Booksellers Prize and the James Tait Black Memorial Prize. He also had two consecutive novels, A Long Long Way (2005) and The Secret Scripture (2008), shortlisted for the MAN Booker Prize.

On Blueberry Hill received huge critical acclaim on both sides of the pond with The New York Times describing the play as “Radiant”, The Sunday Independent calling the new work “Phenomenal” and British Theatre Guide hailed it as “Perfection”. The New Yorker described it as “Beautiful” and “Mesmerising”.

In Barry’s beautiful style, On Blueberry Hill features best of friends and worst of enemies Christy (Niall Buggy) and PJ (David Ganly), who are destined to share their lives for twenty years. As the two men reflect on the hope and torment of life outside – they slowly uncover the events that have led them to their world with explosive, bittersweet consequences.

Reprising their roles as Christy and PJ are Irish Times Theatre Award and Olivier Award winner Niall Buggy and West End and Broadway star David Ganly. Directed by Fishamble’s Jim Culleton, this new play is bursting with humanity, as it explores forgiveness, survival and, ultimately, love.

Sebastian Barry said: “So happy to hear the splendid news that the truly brilliant work of Niall Buggy, David Ganly, director Jim Culleton and all the crew at Fishamble, will be seen at the fabulous Trafalgar Studios. We all longed for a further life for characters Christy and PJ, holed up in Mountjoy Jail, and now here it is, wonderfully, in very best style.”

The production is designed by Sabine Dargent, with lighting design by Mark Galione, sound design and composition by Denis Clohessy and is produced for Fishamble by Eva Scanlan. This production of On Blueberry Hill was originally produced by Fishamble and will be produced in the West End by Trafalgar Theatre Productions and Fishamble.