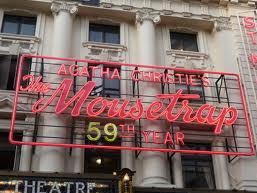 The curtains are now officially up for Matilda The Musical as the holiday period ends and a brand new term begins. Last night was Press Night and it seems that anyone who was anyone was there, including the show’s creative team: writer Dennis Kelly, director Matthew Warchus and composer/lyricist Tim Minchin. Between them, these three have created what will surely be one of the giants of the West End, joining The Phantom of the Opera, Wicked, Ghost and, of course, Les Miserables, of which it has much in common with. Revolutionary France in the nineteenth century and the rather smaller world of one exceptional little girl may not share all that many similarities, but both musicals sprung from the creative vision of the RSC and earned themselves West End transfers with their brilliance. Les Miserables has been making ‘mother’ proud for the last 25 years, but now its younger sibling is competing for the role of favourite child and Matilda The Musical is a very special child indeed.

A host of celebrities showed up for yesterday’s Press Night, such as Hugh Bonneville (Downton Abbey), Hermione Norris (Spooks), Ben Barnes (Chronicles of Narnia), Ronni Ancona (Big Impressions), Hugo Speer (The Full Monty). The faces of some of the West End’s stars were also seen in the audience, including recent winner in the Evening Standard Theatre Awards, Sheridan Smith. A number of them took to Twitter after the show to express their overwhelming praise for Matilda:

Tim Walton: “Is Matilda musical the best thing or what! Step aside mamma Mia for feel-good factor!”

Caroline Keiff: “Such an enjoyable, entertaining and clever musical. Fabulous!”

Even the elusive @WestEndProducer added his usual entertaining musings to the night – “Well Matilda was marvellous, what a fabulous show. I need to kidnap a couple of those kids for Oliver.”

This morning, the press reviews have started popping up, with most publications awarding the coveted five gold stars to this musical adaption of Roald Dahl’s classic story. One or two were more reluctant to go that far, settling instead for the slightly less shiny four stars. The musical’s title character is a whizz with numbers and letters and I’m sure she would agree that four/five-star reviews spell s-u-c-c-e-s-s for Matilda the Musical.

It’s not only musicals that can enjoy a lengthy run in London’s West End though. There are many plays drawing in healthy crowds, none more so than The Mousetrap at St Martin’s Theatre. Agatha Christie’s murder mystery has been entertaining audiences since 1952 and has even made the Guinness Book of Records as the world’s longest-running play. Tonight’s performance marks its incredible 59th year in the West End and in the lead-up to its diamond jubilee, it was announced today that The Mousetrap will embark upon a 60-week UK tour in 2012. The first date will be at The Marlowe Theatre in Canterbury on 11th September 2012, with further visits confirmed for Glasgow, Milton Keynes, Belfast, Cardiff, Plymouth, Manchester, Edinburgh, Southampton, Woking and Bradford. In an interesting twist, the ‘all-star cast’ (names to be confirmed) will change every twelve weeks.

Further 60th anniversary celebrations have been planned, including licensing The Mousetrap for sixty worldwide productions in countries such as Australia, Korea, France, South Africa, America and more. A gala in aid of the ‘Mousetrap Theatre Projects’ charity, which helps to bring London theatre to thousands of disadvantaged youths, will be held on 25th November 2012, with the charity also launching a ‘short mystery’ educational writing project for Year 6 school children throughout London.

Musical theatre can sometimes dominate the West End, basking in the limelight while the dramatic productions are relegated to the shadows, so it pleases me to see a play of such calibre receive some well-deserved attention and recognition. The Mousetrap has been thrilling London audiences for over half a century; now the rest of the country can join in the fun in asking, ‘Whodunnit?’

Following its multiple West End runs, and continuing success at its home – The Other Palace, Heathers the Musical will embark on its highly … END_OF_DOCUMENT_TOKEN_TO_BE_REPLACED

After creating the “absorbing and provocative” Version 2.0 and the “eminently lovable” Letters, Kashyap Raja returns to London with his new play Earth … END_OF_DOCUMENT_TOKEN_TO_BE_REPLACED