After sold-out development runs at the New Diorama Theatre in 2019 and Southwark Playhouse in 2020, 2021 & 2022, plus an extended Riverside Studios run this summer, Operation Mincemeat transfers to the West End’s Fortune Theatre for previews (SpitLip never rest on their laurels) starting on the 29th March, followed by an 8-week run beginning on the 9th May 2023. Operation Mincemeat will be following thirty-three hugely successful years of The Woman In Black at the Fortune Theatre. 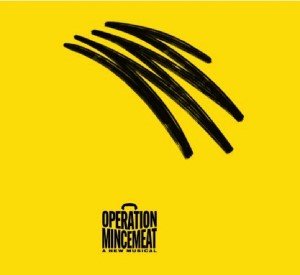 The year is 1943 and we’re losing the war. Luckily, we’re about to gamble all our futures on a stolen corpse.

Singin’ in the Rain meets Strangers on a Train, Noel Coward meets Noel Fielding, Operation Mincemeat is the fast-paced, hilarious and unbelievable true story of the twisted secret mission that won us World War II. The question is, how did a well-dressed corpse wrong-foot Hitler?

Operation Mincemeat won The Stage Debut award for Best Composer/Lyricist, the Off-West End award for Best Company Ensemble and was listed in the Observer’s Top 10 shows of the year. The show is currently featured in the V&A’s Re:Imagining Musicals display, exploring how musicals have continuously reimagined, reinvented and reinterpreted themselves over time.

SpitLip said: “We’re overjoyed, overwhelmed, overtired, and cannot believe we’re bringing our show to the West End, where it will definitely run for at least 33 years”

Jon Thoday for Avalon said: “We’re very pleased to have supported the show to date and delighted to be chosen by SpitLip to help bring such a funny, moving and brilliant show to a wider audience”.

The show was commissioned by New Diorama Theatre, co-commissioned by The Lowry, and supported by the Rhinebeck Writers Retreat with additional support from Avalon.

Operation Mincemeat is presented in the West End by Avalon in association with SpitLip.

‘An utter triumph, this is a delightful and engaging production.’
Operation Mincemeat at Riverside Studios
Review by Chris Omaweng

'Look anyone will tell you, I’m a pretty straight sort of guy.' Tony Blair A reckless reappraisal of the life of former Ugly Rumours front man and … END_OF_DOCUMENT_TOKEN_TO_BE_REPLACED

Michael Harrison and the Really Useful Group are thrilled to announce that The Wizard of Oz, the musical based on the iconic story by L. Frank Baum, … END_OF_DOCUMENT_TOKEN_TO_BE_REPLACED

Following major demand for tickets, the Queen of comedy Dawn French has announced a host of new UK tour dates for her critically acclaimed live … END_OF_DOCUMENT_TOKEN_TO_BE_REPLACED