90s Icon MR BLOBBY is BACK in the Panto Habit!
He has caused mayhem on our television screens for 30 years, and now he’s set to bring the chaos to the stage in Peter Pan at The Chrysalis Theatre in Milton Keynes this panto season. 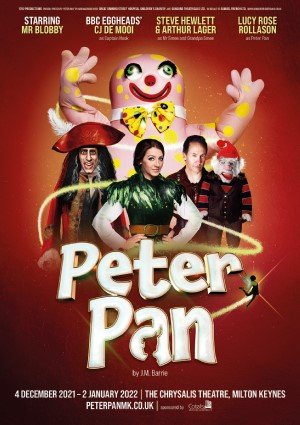 Mr Blobby first appeared on television as the sidekick of Noel Edmonds on the BBC One Saturday Night spectacular, Noel’s House Party, in 1992. He quickly developed cult status and beat Take That to the Christmas Number One spot with his hit song “Mr Blobby” in 1993.

Blobby was a pantomime regular throughout the ’90s and ’00s, but this is the first opportunity that fans have had to see him in action for several years. He’s also developing a following with a new generation, having recently appeared on TV ads for Tesco and Virgin Trains, as well as regular appearances on quiz and comedy shows.

Speaking about the casting, show producer Steven Gordon-Wilson said: “I remember seeing Mr. Blobby in pantomime when I was a kid – genuinely memories that still make me laugh today. I can’t wait to create memories like that for a new generation. He’s going to appeal to the younger audience just as much as the parents getting their nostalgia kick! I don’t know whether I should admit this… but Mr Blobby was the first single I ever purchased – so this is a bit of a weird time for me!”

The show also stars top comedy ventriloquist and Britain’s Got Talent favourite Steve Hewlett who will be playing the role of Mr. Smee, Alongside Steve, is celebrity quizzer and West End actor, CJ de Mooi. CJ is one of the most
recognisable quizzers in the UK, having made up part of the original team of Eggheads on the BBC2 quiz show. More recently, CJ has been performing in the West End and is currently producing a new television sitcom.

The global smash hit musical MAMMA MIA! will return to London’s West End at the Novello Theatre on 25 August 2021. Now in its 23rd year in London, … END_OF_DOCUMENT_TOKEN_TO_BE_REPLACED

Greetings, salutations and welcome to the West End 2021 class of Westerberg High. Leading the cast in the highly celebrated return of Heathers the … END_OF_DOCUMENT_TOKEN_TO_BE_REPLACED

THE PRINCE OF EGYPT, the hit musical based on the classic DreamWorks Animation film, is proud to confirm the complete cast, orchestra and company of … END_OF_DOCUMENT_TOKEN_TO_BE_REPLACED