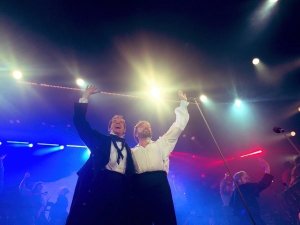 For over 9 years between them, they brought down the chandelier at Her Majesty’s Theatre in London’s West End playing the lead role in Andrew Lloyd Webber’s ‘The Phantom Of the Opera’. Now, in the wake of the greatest crisis their industry has ever faced, Earl Carpenter and John Owen-Jones have found a way of taking down the barriers to enjoying a night out at the theatre- by going open air.

The two ex-Phantoms have combined to develop an innovative new production ‘Voices Of The West End’ that will bring the magic of the musicals live to audiences once again- in a new, safe way at 4 wonderful venues around the United Kingdom, BROADLANDS in Romsey; STONOR PARK near Henley-on-Thames; home to the Northumberland County Show BYWELL HALL and the BRITISH MOTOR MUSEUM in Warwickshire and all supported by MAYFLOWER THEATRE SOUTHAMPTON, AMBASSADOR THEATRE GROUP, BIRMINGHAM HIPPODROME and NEWCASTLE THEATRE ROYAL. 3-metre square, roped off picnic pitches will ensure lovers of live performance can again enjoy four of the West End’s finest voices perform with live musicians in a safe environment.

“This has been inspired by so many friends and fans messaging both of us and saying one of the things they have missed the most is a trip to the theatre” said John, talking of what prompted the idea. “Much has been written about the crisis facing live performers, so we wanted to do something positive in the face of that.”

Earl and John are no strangers to performing together- they are the original Valjean and Javert of Cameron Mackintosh’s 25th Anniversary Tour of Les Misérables, Broadway and West End Stars, Earl Carpenter and John Owen-Jones, a partnership immortalised on the 2010 Les Misérables Live! They will be joined by the wonderful Kerry Ellis who originated lead roles in West End and Broadway productions of Wicked and We Will Rock You. And where two former Phantoms go, there is always a Christine in tow– this time Katie Hall who played the legendary role alongside John and Earl in London’s West End and UK touring productions.

Earl and John have developed an evening designed to celebrate the joy of musical theatre, as John puts it “Everyone knows one of the happiest and most joyful escapes can be a trip to see your favourite musical performed live and we felt a slice of that is exactly what was needed right now- we’ve all had enough of only looking at screens!”

By creating separate picnic plots marked out for you and your family or loved ones to sit together outside and enjoy the show- at a safe distance from other attendees, Earl has developed a production that beats the confines of closed down theatres. “I’m hoping people will bring their own deckchairs or picnic or even dress up as their favourite musical characters!” John added.

As well as hosting the events at some of the most beautiful venues around the UK, the team have partnered with local theatre box offices to sell tickets to the events. Earl commented “I’m overwhelmed by the extraordinary support we’ve had from all the venues we’re visiting and the theatre box offices we’re partnering with. They’ve all commented on how positive this project is for their own teams. Rather than constantly refunding cancelled shows- they can positively sell tickets to these events.”

As a commitment to their industry, Earl, John, Katie, Kerry and musicians Music Director and Accompanist Jennifer Whyte and Cellist Yvonne Marie Parsons are championing Acting For Others, the combined theatrical charities with Dame Judy Dench as its President.

Tickets are based on up to 4 PEOPLE ONLY exclusively from two households or support bubbles sharing a post and roped pitch that is allocated on arrival:

Tickets on sale from 2PM on Monday 3rd August online at: